Almost have both side of the current length done,
but I also have to extend this about double it's size
YIKES!!! 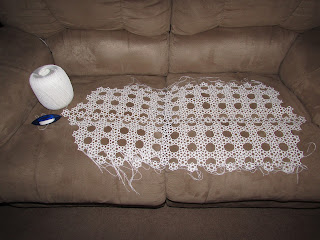 I was asked how many balls of thread I had already
used, well.....I actually bought this Aunt Lydia's huge
ball of thread when I first started tatting because it
was the only available thread here in town, and being
new to tatting at that time I just bought what I could.
It was intended for tons of tatted snowflakes, until
I found Lizbeth thread and lots of fun colors which
put snowflakes on the side for all kinds of other
interesting projects!!
Well, I have 2 of these huge balls of white thread,
and this is the one that has been used the most and
you can see it still have a ton of thread on it(thank-
fully, so I don't have to buy more for this project
any time soon!).  And I set my Tatsy shuttle up
next to it to show how large it is. 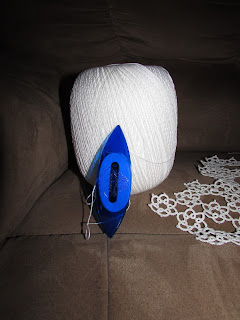 Fantastic project to use up that thread!

Wow, that is a masterpiece very beautiful and thanks for the information on the thread, I do have a place in the heart for aunt Lydia's and looked through her threads the other day💟 some of her new veragated colors are fantastic! Great post have great day😄🌹😄

I remember buying huge balls of Aunt Lydia's! I was always amazed at how many doilies I could crochet from one ball. I'm sure I still have some hidden around here!

I think you will make it with the amount of thread you have, Looking good so far

it is going to be marvelous!