Invasion about to happen.......(no tatting to show)

If you don't hear from me for a week, it will be because I have been overtaken by 2 granddaughters who are arriving any time now and staying for a week.  They are 10 and 6 and love full control!!!  :)
Have an awesome week!!!!!   :)
*****Tatting update-I finished round 7 on the Spring Doily, and tatted a cross with errors which looked beautiful and was sturdy, but I forgot to scan it before I took it to the 90yr. old as a surprise.  :)
Posted by God's Kid at 3:50 PM 3 comments:

Here is the Katrine Cross from Tatted Bookmarks  - cross-shaped by Lene Bjorn.
It's tatted in size 40 Lizbeth Rainbow Splash.  It's for another senior in our Sunday night group. 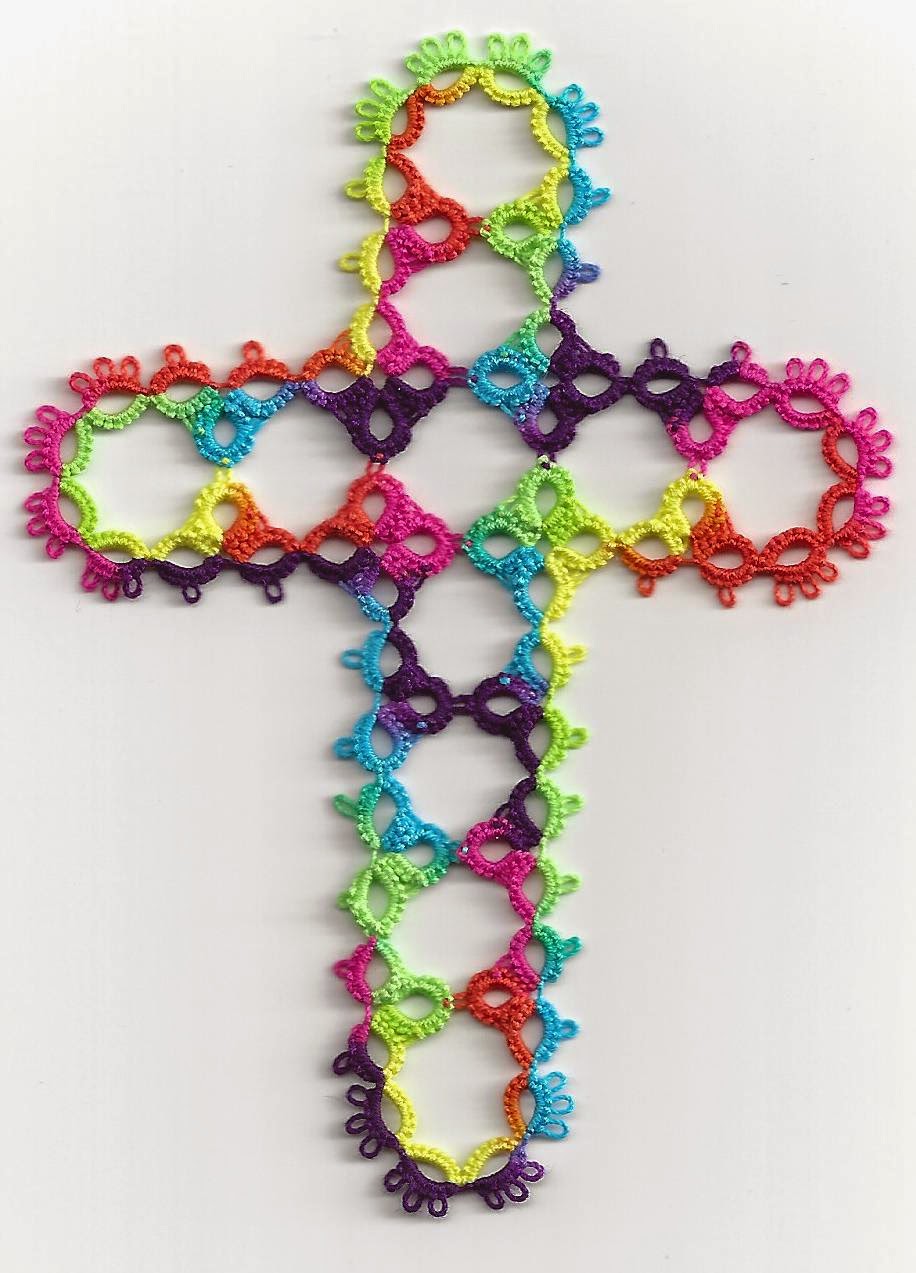 I think this is the last cross I have to tat for now, but no promises.
Also, you may notice that I am not big on tatting tassels-it's just me.  :)
Oh, I have been working on the Spring Doily yet.  I have most of round 7 done.
I have also been working once in awhile on that very long beaded garland too, but not making tons of progress with so many other things to be busy with.  Have a blessed day!!!  :)
Posted by God's Kid at 6:57 PM 12 comments:

This is a second test tat of the Butterfly Carousel from Elaine P. Gan from Test Tatters on Facebook.
I was hoping to get it fully correct this time, but made the same small mistake!!  I NEED to pay more attention when near or at the end of things!!!!
This is tatted in size 40 Queen Anthias from Tat-ilicious and variegated greens from her too.
I totally love this piece(even with my mistake!!!).
I made one small change in the pattern and made the small single ring next to the outer butterflies an SCMR so that it looks like leaves next to the butterflies.  :) 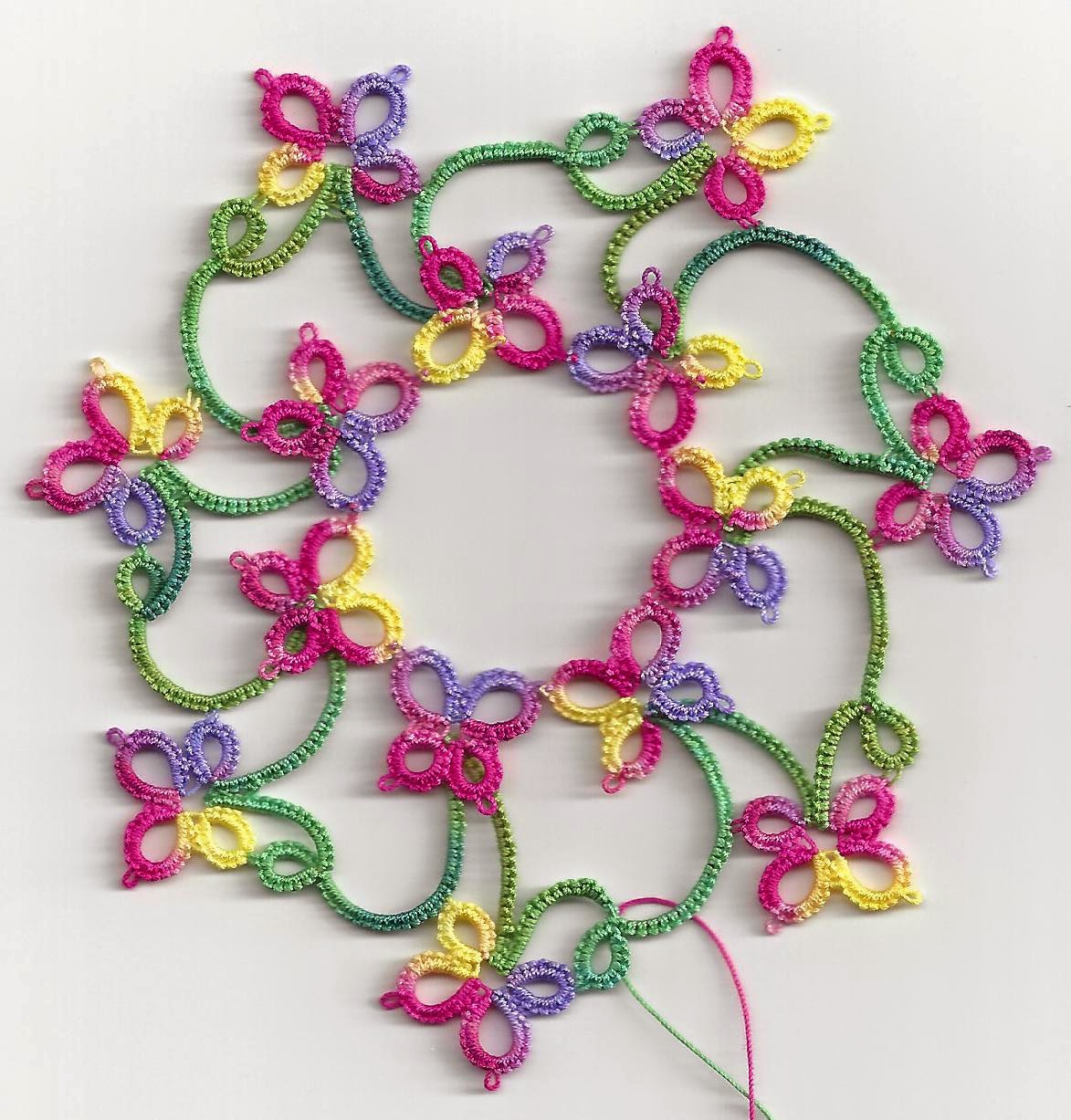 This is the Maria cross from Tatted Bookmarks  - cross-shaped by Lene Bjorn.
It's tatted in size 40 Lizbeth Antique Violet Med.
I used this color for Mauve thanks to recommendations for several wonderful tatters!!!  :)
Now hoping that the lady who likes Mauve is happy with it!!  :) 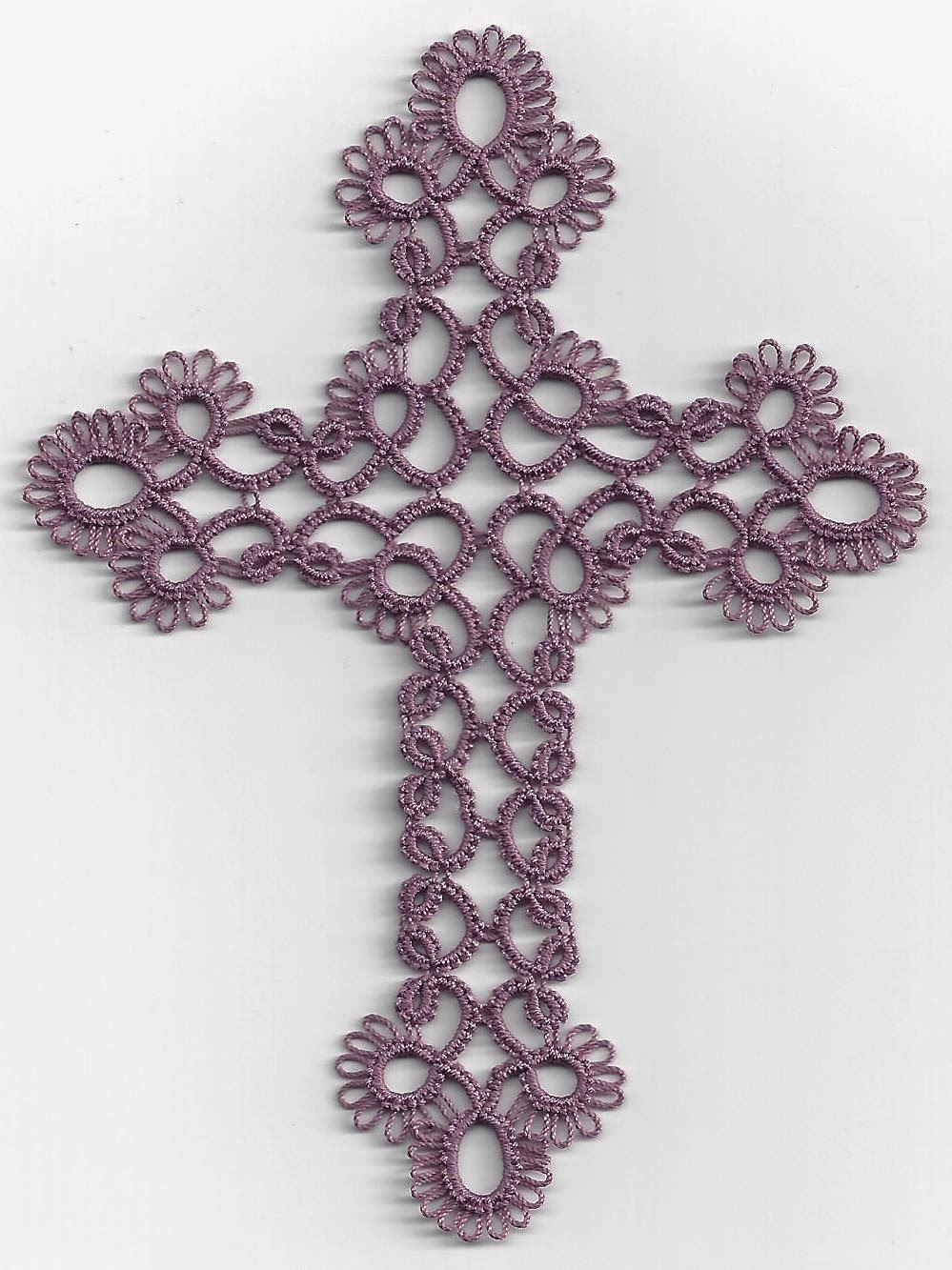 I am still making crosses for each of the seniors in our Sunday night group.
This one is Garden Cross from Tatted Bookmarks Needle & Shuttle Edited by Barbara Foster.
It's tatted in size 40 Lizbeth Purple Iris Fusion. 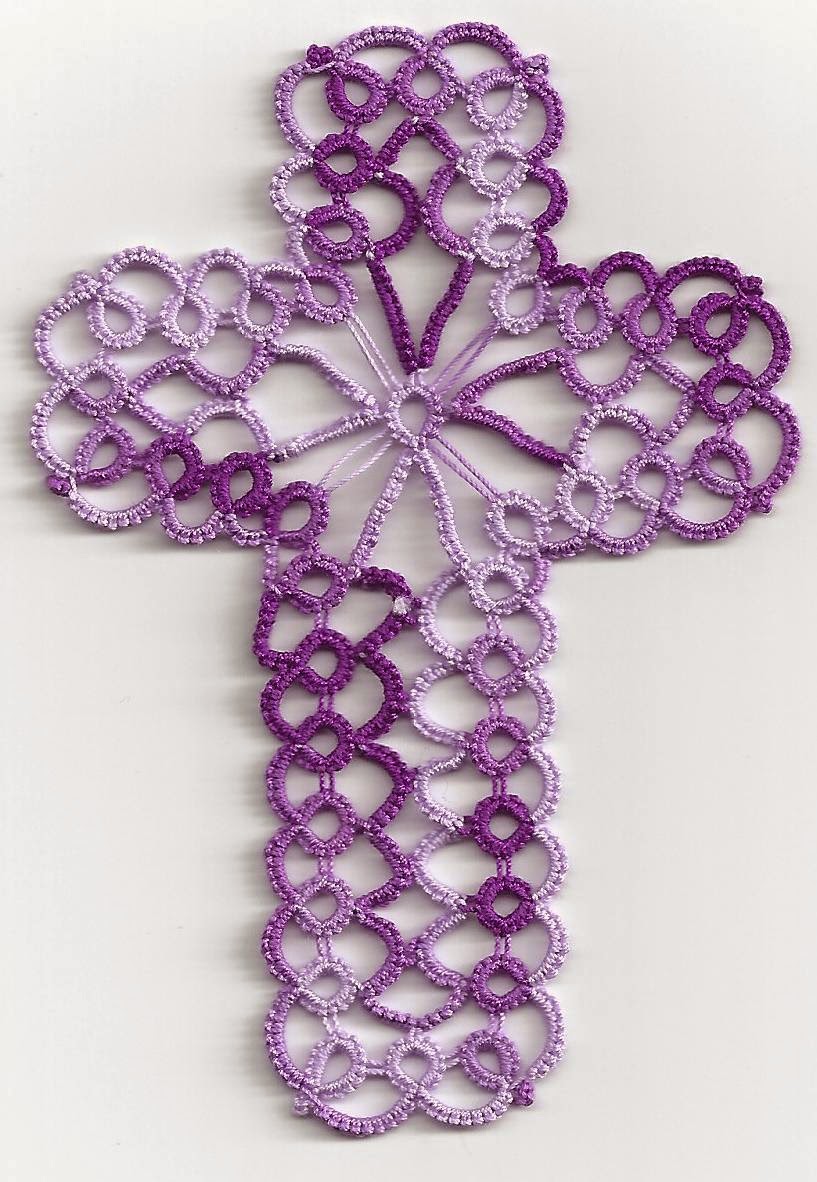 This second one is Helene from Tatted Bookmarks - cross-shaped by Lene Bjorn.
It's tatted in size 40 Lizbeth Niagara Falls. 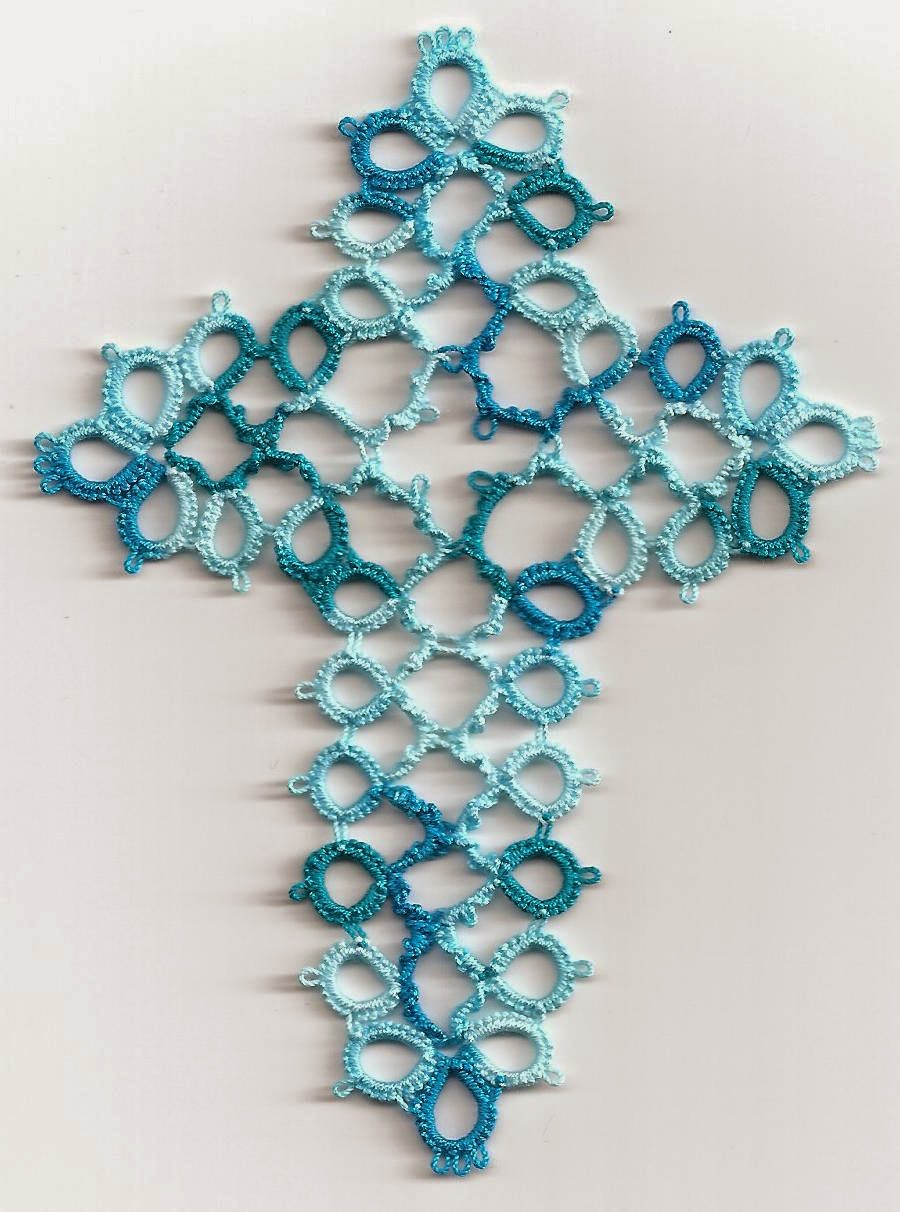 Both of these crosses were challenges to me.  The first one due to the fact that the center ring is tatted, then the outside, then fill in the the rest, and the tiny rings of 4 ds on each corner
which wouldn't close properly for me.  I had tatted this cross in red and white first, but missed a ring completely and it wouldn't lay correctly at all when finished so I started over and succeeded this time!!  :)
This second cross has all spiral chains in it which was a problem for me.  I tried to make them, but they kept twisting up badly and I just couldn't get it done right, so... I started over and used 6 first half of ds, and then 6 second half of ds since the stitches were 12 count.  I think it looks similar.  Also, this thread challenged me due to the fact that while closing 2 of the rings the thread broke on me.
Posted by God's Kid at 10:59 AM 12 comments:

These are the tiny feather charms I use for the small dreamcatcher earrings I make.  Hope this helps!!  :)

This is another test tat for Elaine P. Gan at Test Tatters on Facebook.  It's called Butterfly Carousel.  And let me say that it was a real challenge for me!!!  I thought when looking at the diagram this would be easy, but....it fooled me and I had many, many starts trying to get this done.  Elaine had lots of patience with me and sent me several more diagrams to help and today I did it!!!  But, there is one error I know of.
It's tatted in size 40 Lizbeth Tropical Punch and Tat-ilicious variegated greens. 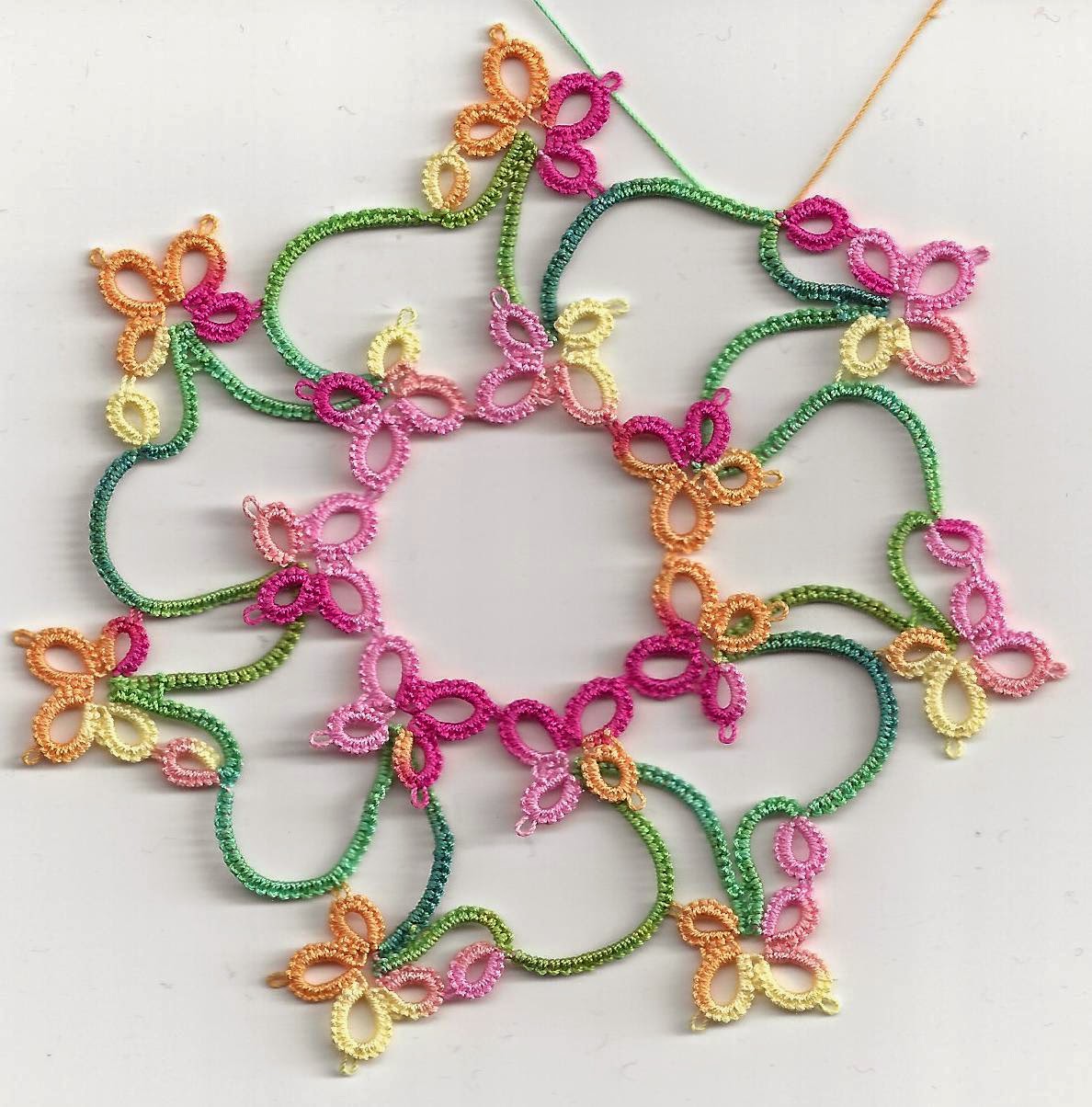