A Rainbow to brighten my mood!

A friend needed a tatted lanyard to hang
her cross on, so...I tatted one for her!!
She loves purple so I used purple beads.
It's finished an looks much better than I
thought!!!! 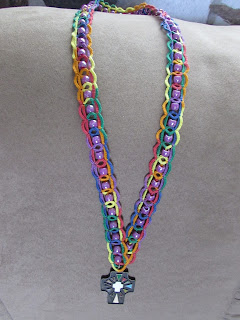 Not my best work, but I have tried tatting
a lanyard 3 times over the past few months
and just could not get it to work right.
First, I had beads which were too heavy
and larger than these, then I was using
size 20 thread which wasn't working.
Next, I got these beads and they are too
large so I finally switched to size 10 thread.
It's cheaper, but it's bright and fun and it
works!!! :)
A little close-up below. 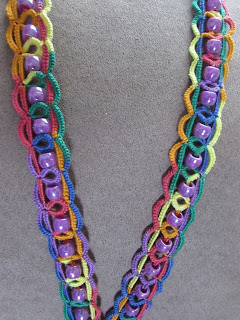 Looks great, very colourful and will go with anything she wants to wear

Very cheerful. Reminds me of sunshine and rainbows.

Definitely cheered me up :-D

I like that lanyard! Bright and cheery.The size 10 thread makes it go fast.