This is not terrible hard, but I started and made
a major mistake of joining all the large rings as
well as the small rings which was not working.
It's tatted in size 20 Lizbeth Black and Rainbow
Splash. Colors inspired by Tatting Tatsright
from Facebook. The pattern is here:
https://drive.google.com/file/d/0B0pOHOVc1tSsam5lUnhUZkFBRm8/edit
It's the bottom pattern, although I am planning
on trying the top pattern when possible.  :) 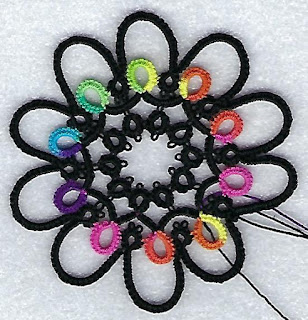 I also worked on a few other things today.
I was trying to tat a small Ice Drop with the small
clear gem, but it kept slipping out of the tatting
so I tatted chains with tiny beads around the front
to tighten it a bit.  ;)  The Peacock Blue pieces
on top were supposed to be for it, but..... they
were not large enough so I thought some young
girl would like them for earrings, so I have to
assemble them. 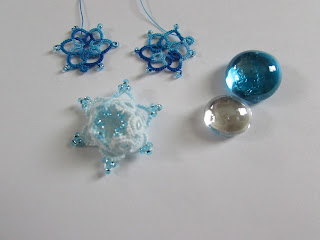 And, I am working on a lanyard for a friend.  I have
failed twice at doing what I wanted to do, so I decided
to wing-it and just tat!!!  I will post it when it's done...
maybe.  ;) 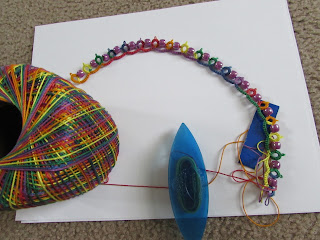 I love the color contrast of the black with the brights! Is that a hand-dyed thread? It's tough to get a pattern to work with those smaller glass gems.

Thank you Diane!! :) That is Lizbeth Rainbow Splash. ;)

That first photo sure grabs the eye! Nice one.

I like the black with the coloured thread,
Beautiful ice drop,
I hope the lanyard works out ok look forward to seeing it when finished

Love that black and brights motif! I hope we will see the lanyard, good luck with it. And getting the small ice drop to 'stick'.

Wonderful motif with the black and variegated threads. Black thread can be difficult to work with but always makes the other colors pop.
I love the look of the tiny beads in the Ice Drop. You solved the problem nicely!