Not so pretty, but sparkly in person

This is Anika's Golden Star Earring Pattern link here:
http://tattingitup.blogspot.com/2012/12/3-d-flower-earring-pattern-and-golden.html
(you do have to scroll down a bit).
This is tatted in size 40 Lizbeth Niagara Falls
with blue bugle beads and little blue glass beads.
I made a few mistakes, but it's ok.  If I sew it on to something
I am sure I can make it looks right. 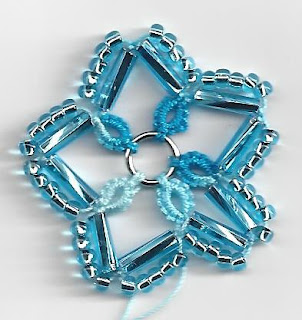 I also "copy-tatted" this bracelet in these blues:
http://tattingitup.blogspot.com/2012/12/tatted-gifts-and-apple-pie.html
(scroll down a little).  It looks similar to this star(her's is in white and gold).
When I originally saw the bracelet and printed a picture of it
she had posted  that she didn't post a pattern of it and
not to show it on the blog so I will honor her wishes, but she hasn't been on since 2013 and it no longer says that so I will just not post a picture.  You can see her bracelet and imagine it in blues.  :)
Have a great tatting day!!!!  :)

Thank you muskaan!!! :) I know where I made my mistakes and that was probably because I was tired and trying to figure out if it was really working or not.

That's really pretty. I can imagine the beads do sparkle.