I was kind of freaked out when it was suggested that
we would design a 3-D project, but I took time to
think about it and then asked some friends for suggestions
since I don't want to tat the same thing everyone else has,
especially since there are some awesome 3-D tatted items
out there.
A friend suggested a heart, but I told her and showed her
the beautiful ones I have already seen and said that I could
not do that well.  She then suggested a teapot cuz' she loves
teapots.  So....I got busy.
The result below.  Not perfect, but cute.
Tatted in size 40 Lizbeth Lilac Dk., Fruit Fizz, and
Snow White. 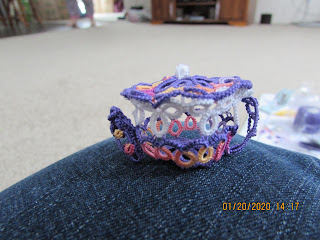 For size comparison the below picture without the top,
handle and spout gives you an idea. 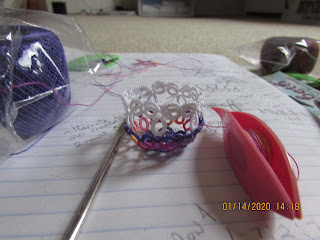 Most of it wasn't too bad, but the top flattened which
I hadn't planned, and the handle came out ok, but
the spout was a terrible thing to try and figure out.
If it hadn't been so tiny then figuring out a tube might
not have been so bad.  I ended up after trying 8 different
things, just tatting and then sewing it on.  ;)
In my hand below. 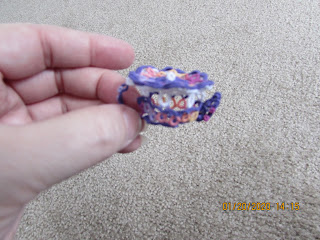 I am making it a gift to the sweet lady who suggested
it.  Can't wait to see her face!!!
Have a wonderful tatting day!!! :)

Very cute ! Love the colours, too 💕

That is adorable and so very tiny love this💐❤💐

Your teapot is adorable! Your design is out of this world! I hope you are doing a happy dance because that is the cutest teapot I've ever seen :)))
Congratulations Sandy Ryan

Thank you so very much everyone!!! :)

That is fabulous and wonderful tea pot, well done on achieving making the teapot

This is the cutest thing I have seen in so long. Wonderful job!