Both twin doilies have row 20 of 33 done now.
On to row 21 and hoping to make better progress
on them. 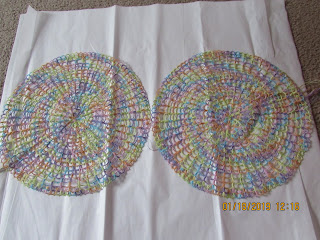 I have also been test tatting and posting some of it,
but I wanted to make sure you know that I am
tatting.  ;)
Elaine P. Gan has choker patterns for us to test tat
and I have been working on them a lot.
I did the blue one, and then the same pattern in
black with red beads, and then dark purple with
silver beads(all of the 3 bottom chokers are the
same pattern).
Then I test tatted the middle one in dark purple
only because the the thread was on the shuttle already,
and then the top one(still in progress), again in dark
purple because it was on the shuttle, but I also
added clear beads.
I wanted a way to package them without folding
the lace so I came up with a piece of card stock
which I cut 2 slits in and connected them to make
a ring which I wrapped the choker around twice
and connected it.  I believe this will be a good way
to package them. 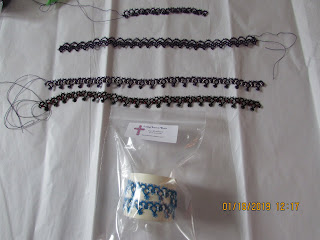 I have also added a few more motifs to the tablecloth,
but not enough to show any real progress.
Hope you have a wonderful day filled with tatting!!! :)

You are a virtual tatting machine! I can't believe you are accomplishing all that you are!

Thank you both very much!!! :)
Kathy, I feel like I am tatting slower and slower. ;)

You certainly are tatting! That is a good way to present the chokers, much better than folding.

Excellent packaging! I sometimes use the cardboard tube from empty balls of thread in similar fashion, especially for WIP edgings. But I really like the simplicity of your tube. 👍