Well, we made it through our first Craft Show.
The Craft Show itself was a first also so it wasn't
as big as many had hoped, but I am ok with that.
Here is our front display table. 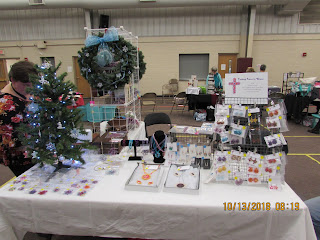 Below is our side table(luckily there was room).
Our friend does knitting and she brought some,
another friend makes wooden keepsake boxes,
and our daughter brought some of her books.
Oh, and the rack was large enough to display
a Christmas wreath on each side(the blue one
sold). 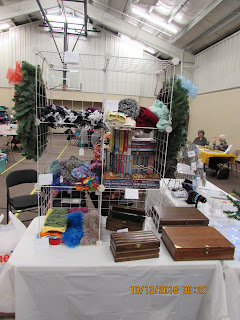 And, we had the only touch of Christmas
I saw, but it was the best way to display
the tatted angels and Christmas Ice Drops.
Since we didn't figure on having electricity
we used battery powered fairy lights. 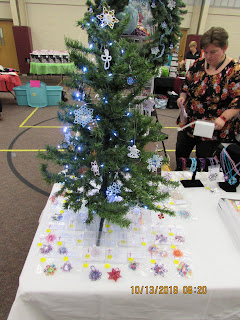 For a double first I think we did well.
Hope you had a fabulous weekend and
got your tatting in!!! :)
Now back to tatting work because I also
received an order for 3 angels(one of
which I had to order the thread this morning
because she wants a purple angel.

Your display is very appealing! Looks like a good sale!

Lovely display! It sounds as though it was worth doing and you got orders too, well done.

Wonderful display! I couldn't find those battery operated lights for my display last year. I must have waited too long!

Well done on your display, craft fairs are not easy and are hard work

Thank you all very much!!! :)
Diane, I bought them off the internet so if you want I can send you the link.

It all looks so appealing !!! Congratulations on the order :-)

I love seeing how tatters display their work at craft fairs and yours looks great. So pleased you did well and hope you continue to make more sales as Christmas approaches. Well done