This is something that caught my attention one night
while not being able to sleep-I was going through
the antique patterns library.
This is Figure 48 from Tina Frauberger's
Schiffchenspitze 1919.
It's tatted in Lizbeth size 40 Raspberry Pink Med.
and Tropical Punch. 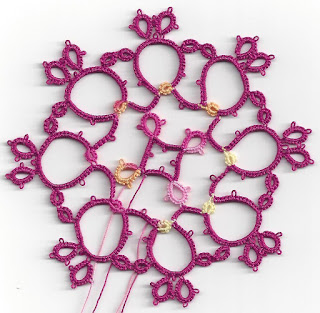 I don't know if it's correct according to the
directions because they are in German(I believe),
and I guessed and deciphered what I could(I
even skipped one line because I couldn't figure
out where it would go).
I also tatted a necklace(actually the necklace was
tatted first), but I am working on attaching findings,
and then I will post it.

I printed out all of Tina's book and sit and look at them all the time. You did a wonderful job it's beautiful 💟😄💟

This is very pretty ! Good catch :-)) Colours are stunning, too.

You've done a great job of figuring it out, looks wonderful. Pretty thread too.

Beautiful tatting. Very nice colorway. Good to use reds and pinks in February. (PS I should have counted my "25 motifs" and never thought to do that. )

I didn't know Tina Frauberger and this is delicious ! Thank you for your share 😀