Getting back into the swing of tatting!! :)

Yes, it looks like a jumbled mess, but my sister says I have organized chaos.  :)
I am still working on the triangle cross.  The first attempt got delayed due to a broken thread (over on the right side of the center group near the ball thread, and then I realized that I needed 6 triangles to have it correct and I only had 5 so I started over).  This ball of thread is the worst I have ever had.  I have had many breaks with the thread and it is so coarse that it irritates my hands, but I figure what better way to experiment than to use a thread that won't stand up for a good project(although, it drives me crazy!!!).
On the top left of the triangle cross pattern you will see what I have accomplished so far.
Oh, if you look at the bottom of the triangle cross pattern you will see
2 other thoughts in progress.   Now, if I could just figure a way to tat this without all the ends!
On the left hand side is one of Elaine P. Gan's crosses named Hope from  her new book here:
http://www.craftsy.com/pattern/other/tatting-ebook-4-crosses/136255
I think it will make a great cross for men and I have it tatted(incorrectly somehow- in this picture on the left) in Yarnplayer's Adventurer HDT size 40.  I was going to use size 20, but she was out so I went with my preferred size.  Seems a bit small, but it will just have to work.
And turning to the right side of the picture, I made a tiny bit more progress on Robin Perfetti's cross-link here: https://docs.google.com/file/d/0B8R5ZNar0YDdV0t4N21JMmhHaEU/edit
Although, in this cross I had another frustration.....part of the thread snapped.
It's still connected, but it got left alone due to frustration from the triangle cross thread breaking several times, and then this snap. 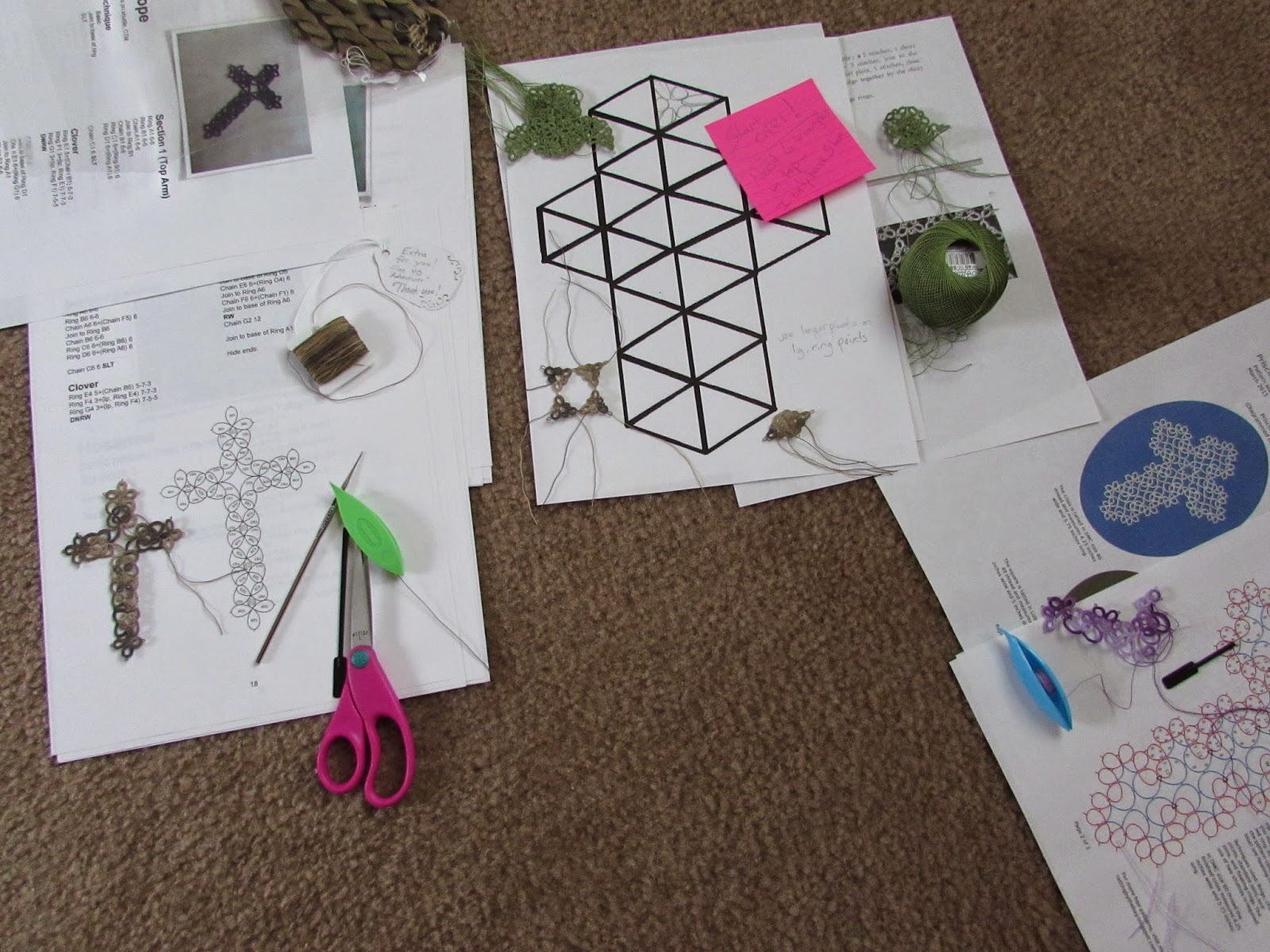 I have several crosses I need to tat for people, 4 more dangles requested, a suncatcher, and to finish my 2014 Spring doily yet.  I never seem to have the problem I have seen so many tatters have- not knowing what to tat next.  My problem is-when am I going to get time to tat what I want.  :)
Happy tatting everyone!!!  :)
Posted by God's Kid at 7:06 PM

I know how that feels! I’m seldom in a space where I do not know what to tat next - but when can one find the time in order to tat all on that ever-lengthening list of to-tats?

I am just glad that you do tat cuz' you inspire me with all your wonderful tatting(even if you don't think it's wonderful!!)!!! :)

I'm amazed that you can keep track of all your different crosses! Keep on going... I love seeing your progress!

Thanks Diane!! :) I have another 5 or so needed crosses and I love making them different depending on the situation.

Lovely, I like going back again and looking at all the crosses you tatted, a lot and all lovely

Wonderful that your tatting is in demand. I'm glad that your hand is healing so you can get on with tatting, hooray.

Thank you Ninetta and Jane!! :)