My thumb is healing!!!  It is sensitive to certain things, but it looks normal.  The raised logo on the TATSY shuttle irritates it, this green thread size 40 from Lizbeth feels like rope against it(but it's the one ball of Lizbeth that has ever felt this way-and to both hands too).
This first picture is of a cross I am trying to design for men(hopefully not so frilly even though it's still lace)  I have 7 out of the 21 triangle done so far, but the thread broke when closing the last ring on the 7th triangle and I set it aside at that moment. 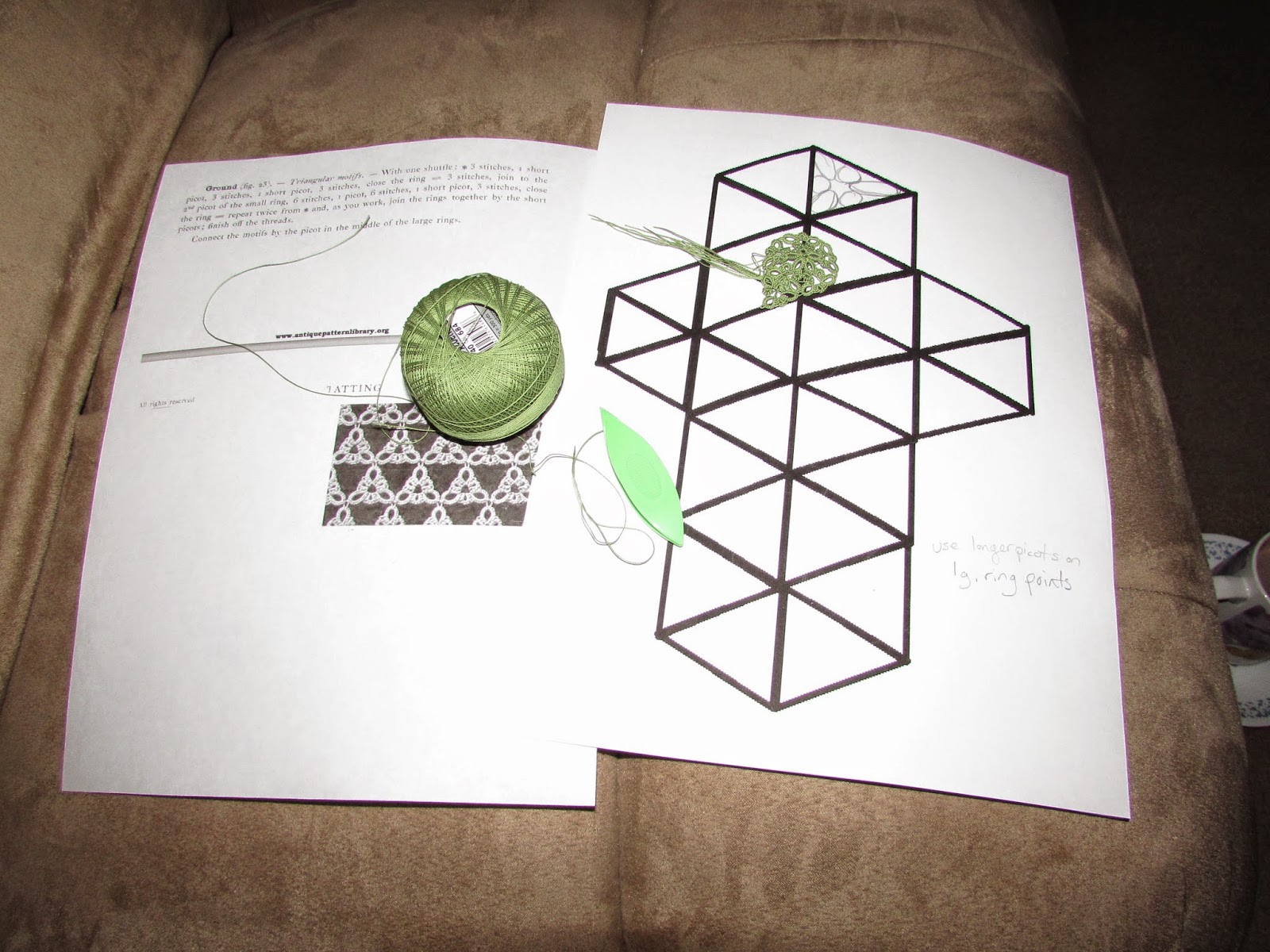 This second picture is of 1 completed cross on the right hand side in rainbow(just need to sew in ends, but not wanting to tackle that with my thumb and a needle yet), and another cross for the young lady who inspired me to learn tatting.  I will give more details later. 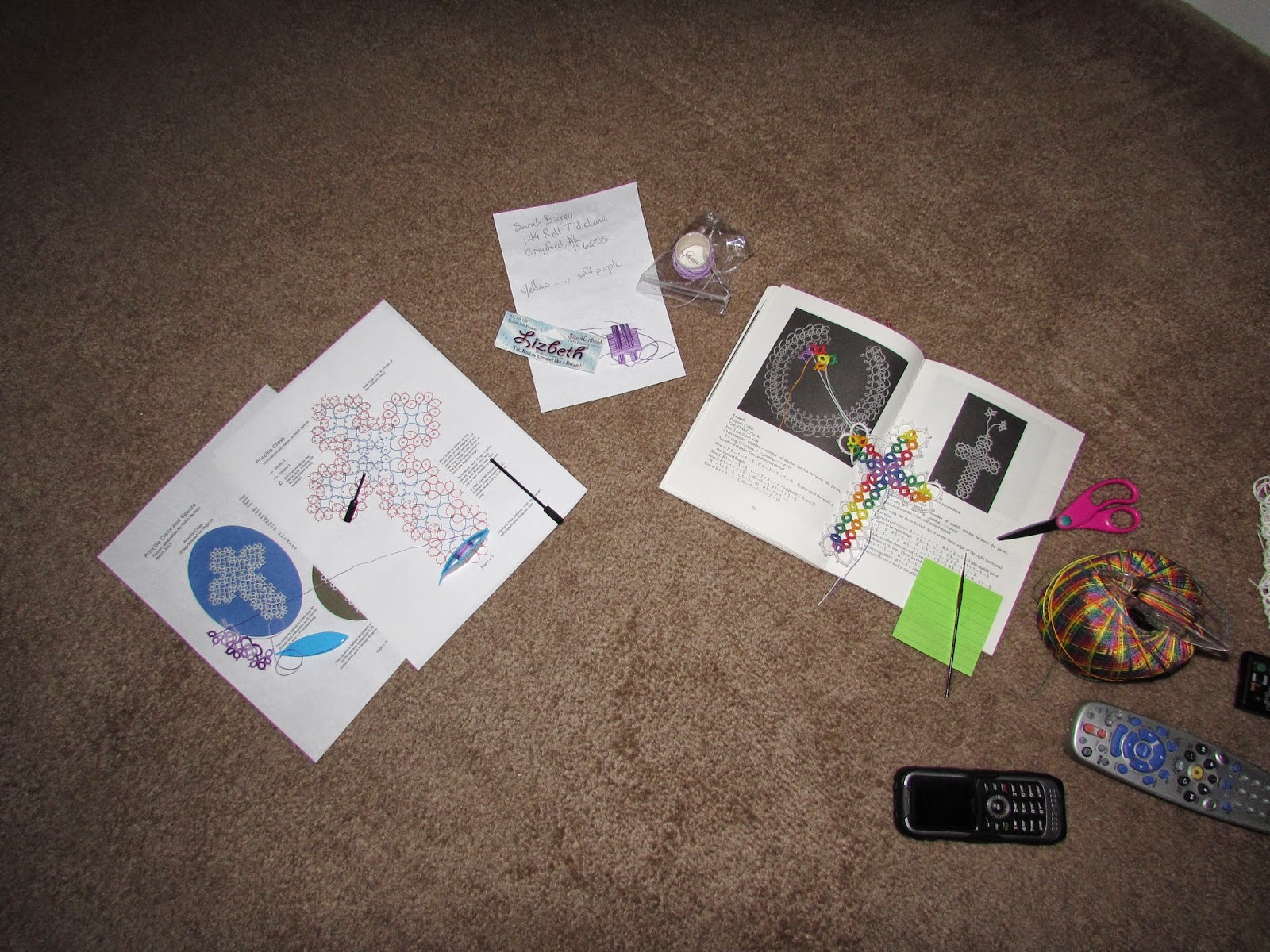 I did get a little more done on my 2014 Renulek's Spring Doily.  I think it has 10 repeats on the next to last round.  And I am hoping to get back to test tatting as well.  Our Saturdays for the next month are very busy, but I might have tatting time for most of them.  :)
Have a happy tatting day!!!  :)
Posted by God's Kid at 8:35 PM

Glad to hear your thumb is healing and you're able to tat again :).

Thank you Jenn!! :)
The green in the top picture is the start of my triangle cross(hopefully)! :)

I hope your thumb will soon be 100% right. I look forward to seeing your triangle cross, it sounds interesting.

I decorated my Tatsy shuttles with napkins and ModPodge a few years ago. The bumpy logo is still evident, but it's not as hard on my fingers. It's great that you are tatting again!

It has quite some time for the thumb to heal ! Glad it is allowing you some tatting time, though.

The tessellated cross is a great idea ... curious to see the results of your experiment :-)

Isn't that Robin's pattern in the 2nd pic ?! Fabulous !

Beautiful crosses. Can't wait to see how your design for men turns out. I see you've started a Robin Perfetti cross. I recently finished one and really love it. I'll post about it soon. Glad your thumb is on the mend.

Thank you everyone!!! :)
Yes, that is Robin's cross in the picture. And I am curious to see if the triangle cross will work out!! :)

I hope your thumb finishes healing soon, I am sure it won't be long before you are back to normal
Margaret

I did a bookmark for my husband and I know what you mean about getting the cross masculine, I think this green is nice and beautiful and still can work for a man You are doing a wonderful job and the others came out very nice too. I hate that the injury slowed you down, I tried band-aids once and they would roll up with the friction.
Hang in there :) bless your finger and your heart :)

Thank you Madtatter80!!! :)
I have had bandaids on before too and they get in my way of the string. Thanks also for the encouragement on the men's cross!! :)