I bought some new thread(not exactly thinking when I bought it).  There are 15 spools of variegated threads.  I wanted to try it and found out that it is quite small. 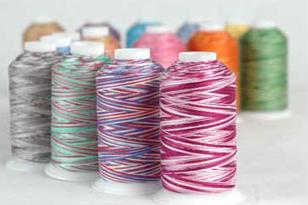 This is where I purchased it.
http://www.threadart.com/c-41-multicolors-cotton.aspx 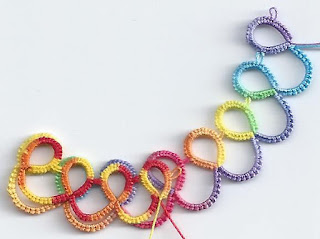 Of course, then I had to tat something real with it. 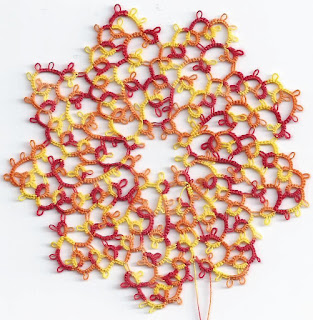 This is Mary Konior's Spinning Wheel Glass Mat from Tatting with Visual Patterns.
It's just under 3 inches across.  It is ruffly and needs blocking(thankfully the scanner held it in place).  The thread was a bit tough to work with since the stitches were so tiny and when picking out errors it weakened the thread lots and so it broke several times when closing rings that were re-tatted.
Other than that, I really love the color!!!!!!!  Any thing I tat with this is going to be small, but I think it will make some pretty motifs(can't wait to see the other colors tatted up).  :)

Oh, the thread is SO pretty. You could make it into HWT by winding two together or even three. I love Hand Wound Thread.

Hi Jane!! Thank you for the comment!! :) I was thinking about trying the HWT sometime. You have had so many beautiful color combinations that way, so I guess that will have to be my next try. :)

What beautiful colors!!! I've never been able to tat with that small of thread, so hats off to you dear friend! A 3" spinning wheel sounds so petite!! Happy Tattings!

I wondered if you HAD used HWT, but you did not, and tatted the whole mat with such FINE thread! It looks wonderful, but you have way more patience than I do!! Diane will be impressed! :-)

The thread looks lovely. How does it tat? Although I like the finer threads, I find a lot of sewing threads are very fragile which makes closing rings an adventure. The spinning mat is stunning and I can't wait to see how the other threads look.

Beautiful thread, lovely colours, I look forward to seeing the other colours.

It turned out terrific! I've tried Jane's HWT method, and I really liked the results. Can't wait to see what you make next!

Thank you Allison!! :) Thank you Kathy!! :) I am working on the HWT for the next project.
Hi Mica, tatting with this thread is a bit like tatting with a softer tatting thread. It has little bumps here and there in the thread which can cause some problems, and if you have to pick out stitches it can weaken the thread or even shred it. But I think it was worth getting to try and I really like the colors! Thank you for your comment!! :)
Thank you Carla and Margaret!! :)
Thank you Diane!! I thought you would like it!! :) I love how bright the colors are!! :)

Wow, I'm gobsmacked! A lot of tatting to do with such a fine thread that has bumps in it! Very pretty colours, I can see why you used it.

Thank you Jane!! :) I didn't know about the bumps till I was working with it, but for something so pretty it was worth the frustrations. :)

Thank you very much Jolimama!! :)

Great colours. I have tatted a lot with hand wound thread. It can be addicting!
Fox : )

All I can say is wow, it's beautiful. Not sure how you did it w/ such small thread!