Tatting something of my own design. Dreamcatcher Earrings.

My daughter loves the look of Indian dreamcatchers and wanted some earrings that were like them.
I set about to make her a pair for Christmas thinking it would be easy enough.  Well, I got the first one done and thought it was awesome, but when I started the second one I realized I made a big mistake...Notice the one on the right(the first one done) looks ok, but it's really not.  When I covered the ring on the second(the one on the left) I realized that on the first I used size 40 Rainbow-licious from Jess, and mistakenly used size 100 Rainbow Bright from Tatskool in the center, which I used on the outside of the second.  So....I put it aside and left it quite frustrated by such a mistake. 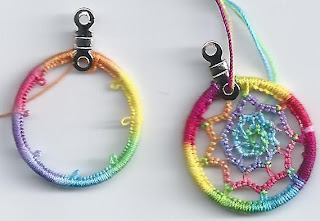 Well, this week I decided to start over since my daughter found out about the project after the holiday and said she would like them bigger.  So, here are the finished ones(sorry the picture isn't very clear).  They are both done in size 100 Rainbow Bright HDT from Tatskool.  I think she will like them. 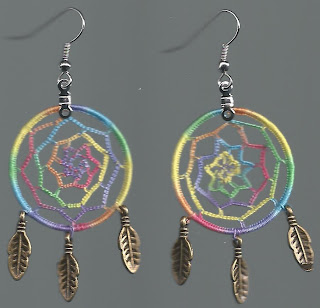 I like your dream catchers, I did a pattern some time ago, which is on my pattern blog, but yours is lovely
Well done
Margaret

Wow, these are gorgeous! Lovely rendition!

Thank you Margaret!! :) I did see your dreamcatchers before and they are wonderful!!! :)
Thank you Michelle!! :)

save it - you may want to do an identical earring at another time?

FYI - Carrie started her own blog:

She has her lovely motifs up.

Thank you Lelia!! I will have to figure them out again if I have to do another pair because I was in a hurry to get them done and not feeling well at the same time. :)

Thank you Fox!! :) My daughter and I love rainbows so I thought she would love rainbow dreamcatchers. :)

I love dreamcatchers! I made them with the "real" stuff years ago, but I never thought about tatting them. Beautiful in rainbow colors :)

Thank you Cindy!! :) I have never made any before, but I figured just tatting around a ring and having picots to join to inside then tatting chains attaching to those picots and picots in the center of the chains would be fairly easy, the hardest part is to tat it without stretching it out in the center. :)

They look great! I even like the "mistake" earring!

Very pretty! You could have done what you did with the doilies and done them in mirror image of each other instead of identical.

Thank you Diane!! :) I like the mistake one too, but I couldn't copy it since I ran out of the Rainbow-licious thread.
Thank you Jane!! :) That is a neat idea!! :)

Your dreamcatcher earrings are fabulous! They look so pretty in that thread.

Such winsome dream catchers! (I not-so-secretly covet a pair...)

Any chance you might be sharing the pattern instructions?

Hi IsDihara! Thank you for your comment!! :) I will have to think about that. I didn't really spend much time thinking about them just making them. The hoop earrings I used have little "twists" around the outside right about where each picot join is and so I tatted around the hoop making picots where the "twists" were and then chains around the center from the outside in. I think there were about 15 ds wraps between each picot, and then 10ds p 10ds for 2 rounds, then 8ds p 8ds for the next round, then I just kept decreasing the number of ds all the way down to 2ds which is when I reached the center. I cut and tied and glued the knot.
It was all just guessing. :) Hope that helps. If I make another pair which will have to wait till July or August-I will post a pattern. :)

Your earrings look great. I am sure DD will love them.