So....if you saw my friend, Cheryl's tatted heart:
http://hiskid66.blogspot.com/2012/09/cheryls-first-tatted-heart.html
It was formed from the center of this doily which I was tatting and having her tat the same thing, but her picots were too large and it stayed in a straight line as if it were an edging and she formed it into the heart. Well, I just kept mine going till it formed a circle to show her what could be done. Then, she wanted to see if and how you could add more to make a doily so I did a second round(no pattern used on this whole project-didn't think I could do that). She really likes it and then asked if I could do more, and I said there were several options and I would do something and show her later. Well, you get to see it first. It's all tatted in size 10. And I am going to write it up for any beginner who wants to tat it. And I think she is going to want to see if I can do more(which I am wondering already)-good thing I have so many awesome tatters to watch for inspiration and ideas!!! Thank you all for sharing your projects with us beginners!!! :) 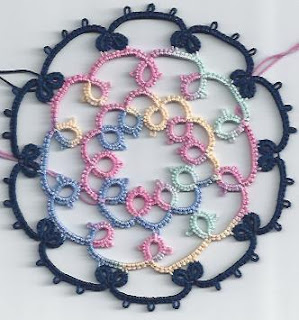 I'm so happy to read that your friend Cheryl is learning to tat. I hope to meet you both on the 29th!

wonderful, teaching someone else to tat.
Your doily is very nice. and the colors work well together.

Well done. It's pretty and lies flat, which is not always a given!

Thank you Ladytats, and Jane!! The center colors were what Cheryl had and wanted me to use at first, and I didn't want to keep using up her very small stash of tatting thread so I told her I would use something I had. I am glad the navy thread worked with the pastel variegated, but either way, I figured it's just for teaching so color wasn't a big deal for now. :) And Jane, I am so glad it lies flat cuz' I was really worried that it wouldn't. It does cup a little, but I forced it to behave without blocking. :)

This is very pretty. Simple and effective and lovely colour combo.
Fox : )