Some space to live and move, a huge relief from the
hotel room!!!
No, not done and this isn't finished, just live-able. 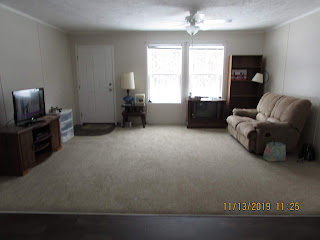 We moved as much as possible Sunday and went
to bed at 10:30pm with no snow, but woke Monday
morning at 8am to 4-6 inches. 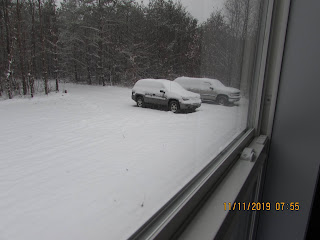 And then woke Tuesday morning at 8am to about
2 ft. of snow.  The buried vehicle has sat since
Sunday night when we got here.  the vehicle behind
has about a foot of snow because hubby got in from
work at 3am Tues. morning.  It snowed almost all
day, and I shoved for about an hour and a half while
hubby slept, but he woke up and had to find a plow
to clear the drive so he could get to work(the main
street wasn't even plowed).  He said there was so much
snow on the road and in the drive that the suburban
was pushing snow like a plow(and it was stuck in the
morning and had to get pushed out by the plow). 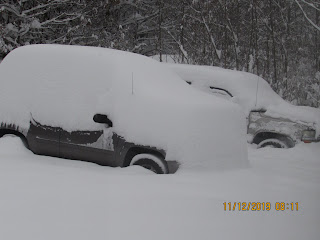 I tried to open the door and see how deep the snow was
and it wouldn't go any farther than this,  and when I
closed it, it brought snow inside. 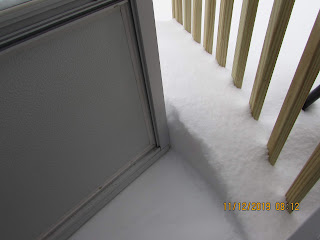 It looked like we had a 2nd propane tank sitting
on ours. 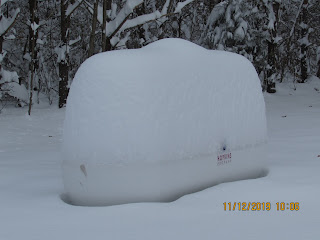 And wow!  Look at all the snow on the air conditioner!! 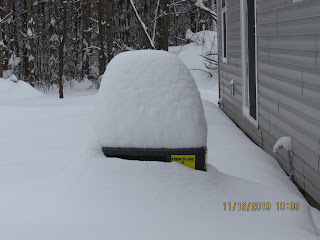 That's me making my way through knee deep snow to
try and clean off the vehicles so that we could TRY
and move them for the plow to clear the driveway. 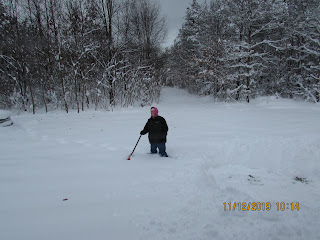 Hopefully soon I will have tatting to show, but first
I NEED to make sure to find a place for most if not
everything!!!!  ;)
Happy Tatting!!!  :)

Reading this depressed me greatly. I dont want that snow here in western PA! But I'm really concerned about your shoveling all that snow. You must not overdo. I can't believe you havent had time to relax in your wonderful new home. Looks like you have a very spaciuos lot! Congrats on finally getting there!

Glad to hear that you have moved into your new home, but oh what weather. Hope the place is warm and that you are able to get provisions. Your house looks very isolated too, do you have neighbours to call upon for help? I should think that tatting is not such a priority at the moment.

I'm so happy that you are finally in your new home! I hope you savor every moment of unpacking and finding a place for everything. What a wonderful way to start the holidays!

Thank you all!!! :)
Kathy, Don't let it depress you!! I just wanted to play in the snow not shovel, but we all must do what is necessary! ;)
Sally, there are neighbors around, and apparently someone was super kind and cleared out the snow around the mailbox so we could receive mail(my hubby found out when he got home last night). ;)
Diane, Sarah and I are already wanting to decorate even though we are not even half unpacked, but most of the decorations are still in storage(1/2 hour drive away). So, I guess that means we have to get things done here first. ;)

WELCOME HOME . . . . sorry about the 2' of snow ; (
We have had snow here, too -- not THAT much. wow.
Enjoy the excitement of getting your new place in order.
I hear we should be in a more normal temperature range next week, fingers crossed.

I cannot even imagine dealing with that much snow! I grew up in rain. Snow makes me want to burrow in! Hope you get unpacked without getting injured.

What a grand welcome 😉 Good to see you finally in your new home. Stay safe and cozy and enjoy every moment🌹🌹🌹🌹

Thank you everyone!!! :)
Lelia, what a way to start the first 2 days in a new home!! ;) We were all thankful for the snow to brighten things up after so much trouble and stress. Now we are looking forward to Thanksgiving and Christmas!!! :)

congratulations on getting in your new place. I am sure you will make it home in no time.

Lovely to see you finally got into your new home, oh dear you really had a bad welcome with all the snow. I hope by now you have been able to get rid of some of the snow and got yourself unpacked, it takes time to sort and find places for everything

That's wonderful Sue, I somehow missed this post, congratulations for your new home! Wow, can't imagine to be surrounded by all that snow, lucky you for having a warm house and kind neighbors ❄❄❄