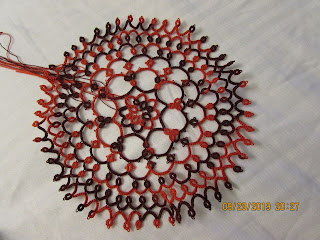 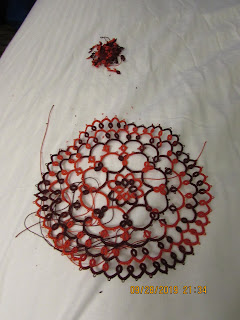 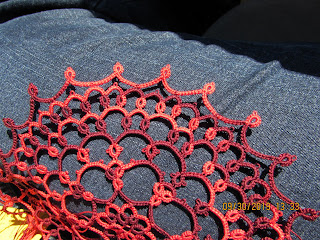 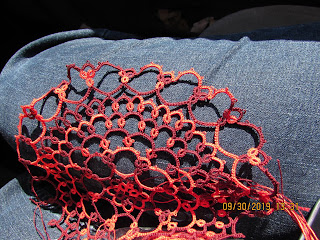 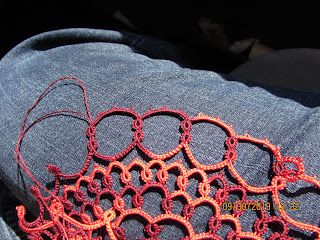 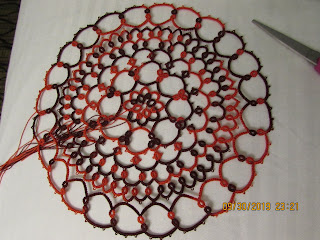 and I am ready to work on the next round tomorrow, hopefully!! The 3 lighter colored pictures of the transitions were due to
being out in the sunshine!!!! Hope you all got in some great tatting today!!! :) House/land updates: For those who have been following
our housing situation, the septic system was put in a few
weeks ago, the concrete slab for the house to sit on was
poured last Tuesday, the well was put in last Thursday, and
(drumroll) the house is supposed to be delivered tomorrow.
They say there is a chance that we could possibly move in
on Oct. 19(praying hard for that or earlier!!). I will let you
know when I know. ;)
Posted by God's Kid at 12:58 AM

Wow, good job. I like your earlier round, though I see it doesn’t have the openness you were aiming for. It’s always interesting to see how designers have to change stitch counts etc. to get the look and to get the work to lie flat. Glad the house situation looks to improve soon!

Perfect solution and great news on the home front 😍💗💞👍👏

I like what you have done with the doily. Excellent news on the house.