Going to be in a Vendor/Craft Show in October

A ministry that we are part of is having a
Vendor/Craft Show in October and I am
going to join in!!!  First, I have heard how
bad it's been for many who have attended
Craft fairs and shows and had decided it
might not be worth it, but since this is for
a ministry that we are part of, it's worth
trying.
This is what I have so far.  I have ends
to sew in on many of the Ice Drops on
the lower right, but that's ok.  I really
don't have tons of time to do as much
tatting as I would like due to the orders
I need to fill, but since most are not
due until December, I think I might be
able to tat some things.  ;) 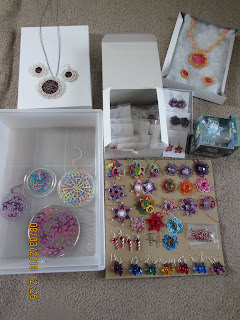 Have a wonderful day with tatting!!! :)

Your pendants are beautiful! You'll need some angels, too! :)

These are all very attractive. I'm sure they will appeal to the visitors and many will sell. Good luck!

I think they are fun and you often get people telling you stories of relatives who tatted. I try to think of it as "I made more money than sitting at home". 😄. I do find it fun to share my love of tatting. I usually have a supply of butterflies for kids to choose from and that is fun too.

Hope you have a great time! :) That sounds really cool, and especially LOVE your Ice Drops!

Thank you all very much!!! :)
Ninetta, I hope to have angels too. I am busy tatting 2 today and the first one just needs ends sewn in, and the second is on the last row.
Michelle, thank you very much for the butterfly suggestion!

Craft fairs are usually enjoyable even if you don’t sell a lot, but I hope you’ll sell plenty of these lovely things as well as having a great time

I'm sure you will have a wonderful time! Your tatting is always so beautiful, it's sure to draw people to your display.

Don’t go with expectations, go and enjoy it, craft fairs have got a lot harder recently hopefully you will do well.
I wish you all the luck in the with it.

Thank you all for the amazing support!!! I appreciate you all!!! :)

Your tatting is always lovely. I'm sure you will do well with the craft fair.