I have been trying to tat the Flying Minor Norwegian Dragon by Anne Bruvold and this is what I have so far. I wanted to do one without the extra picots and on the first one I forgot to add them for joins, and the second one I remembered them, but the string tangled on the close of the ring and snapped. Plus, I don't think that SSSRs and I are going to be friends. 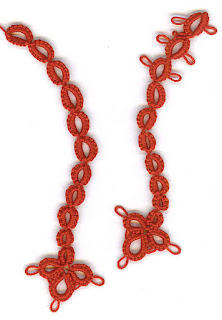 So, the reason for tatting the dragon is for a gift to a little 4yr. old boy. His grandmother(a friend of mine) told me this sad story.
This little boy was told by an older woman that his jacket was ugly. That jacket was given to him by his mother and she had just recently passed away. The saddest part to this whole story is that it was his other grandmother(his dad's mother) who had told him his jacket was ugly.
I just could not believe anyone could be so cruel especially to their own grandchild!!!
I told my friend I wanted to tat a dragon for him and she was overwhelmed that someone would be that kind who doesn't even know him.
So.....I HAVE to complete this dragon!!!!!
Posted by God's Kid at 10:25 AM

Good for you for being so nice. Use regular split rings -- they work just as well. I've used them on all the dragons I've made. :)

God's Kid, Relax, breath & try again. Take your time & go slow. You will get it done. He will love it. As for the other grandmother, she should keep positive on things. Not negative. For he will remember this. Plus she could end up being remembered for not being so nice when she is gone too. He needs love from her not this stuff. I'm sure the coat was just beautiful that his mom had given him. Some people are just nasty & ugly no matter what. But in the end, they do have to answer to their maker. I hope the other grandmother knows how lucky they are to have a young little man in their lives & enjoy their time together. So make his dragon for him & both you be proud of it!

good luck, I have made one, and will be doing another. yes, the SSSRs can be fiddly, however, you could use 2 threads and make regular Split rings if you wanted.

Thanks for the encouragement and suggestions!!!! I really appreciate them all!!! :)
May you all have a super blessed day!!! :)

Me too - I used all split rings! It will be much w=easier and faster too! Poor little kid - he’s going to treasure that cool dragon!
Fox : )

:o( I can't imagine losing your mom at 4 years old.
I would use regular split rings too. :o)

That is a sad story...I am sure your dragon will cheer him greatly!

Split rings and then it seems "sturdier" too. I've done it both and I don't see the advantage to the SSSR one.

good luck- you are doing a lovely thing.

I agree with the others, if the SSSRs don't work regular split rings will. And he'll love that dragon! (Maybe mount it on a backing,like denim, and make it a patch that can be taken off the jacket when he outgrows it so he can put it on the next? He'd get to take memories of that jacket with him as he grows)