You won't believe this, but I was working on Jon Yusoff's Heart 0' Daisies Pattern
here: http://tatsaway-patterns.blogspot.com/2008/08/heart-o-daisy.html
And today my daughter and granddaughters stopped by for a bit and the oldest who's 6 yrs. old claimed the heart and said it was beautiful just the way it is and wouldn't let me do anymore to it(as a matter of fact-it ended up in her hand and left with her).
It's done in size 10 variegated rainbow thread. I will be making the full pattern some time. :) 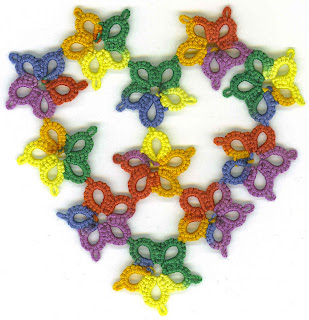 And then her little 2 yr. old sister had to have something herself. Well.....butterflies didn't interest her, but a teeny tiny heart and a little fish were claimed, except that on the way to the car in all the snow(about a foot deep), the fish disappeared and the ride home for mom was awful! There was a terrible lot of screaming all the way home, so....I guess grandma had better make a bunch of "fishies" to get to the little one A.S.A.P. to save her mom's sanity. :)
Posted by God's Kid at 5:12 PM

What a bright and colourful heart! Guess there was a lot of thread-hiding?? Pls show us your ocean full of fishes for the young lady when ready, OK?

such a happy, colourful heart!

The colors are so vibrant looking and cheerful!

That's clever, putting all the motifs together like that... I wonder what else you'll come up with!