Been desiring to tat, but life has REALLY been in the way!!!
Last night I decided to try and empty some shuttles by doing some motifs.
The first is Motif #16 from the book Motifs for Marie(which came from Fox).  There are 3 joined(and might possibly have more later).  Tatted in size 40 Lizbeth Lilac Dk. and Scottish Thistle.

Next is Motif #25 from the same book.
It's tatted in size 40 Lizbeth Raspberry Pink Med. and Raspberry Frappe. 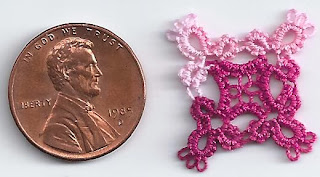 This last one is the Chain Point Motif from the book Tatting the Self-closing Mock Ring for GR-8 Design by The Shuttle Brothers(I believe this book came from Fox too).  It's tatted in the same threads as the motif above(it was actually tatted before the above motif).  I really love this motif and hope to do it in better colors!!!  :)  I have marked several patterns in this book to try later!!  :) 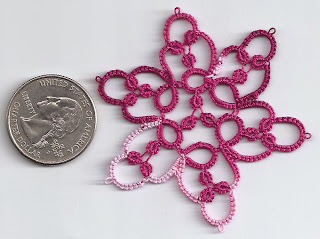 I am still in the middle of several projects which have been sitting till I have clarity of mind and plenty of time to work and prayerfully finish them.  :)
Posted by God's Kid at 9:32 PM

That last one is particularly pretty!
Fox : )

Can't wait to get to work with smaller threads! Those tiny motifs are so dainty and your execution is exquisite! I have so much to learn.

Pretty motifs! Emptying shuttles is good preparation for when you do have time to tat.

I like the first, but I sure it's a little annoying to join three tiny motifs.

Thank Fox!! That one is my favorite!! :)
Thank you Carrie!! It's taken 4 years and I still have a long, long way to go and tons more to learn too!! :)
Thank you Jane!! :)
Thank you Madtatter80!! :) It wasn't hard joining the motifs, and I am hoping to actually join more, but I wanted to post them just to show something! :)

Lovely motifs, the last one is my favourite, gorgeous pattern
Margaret

Thank you so much Jolimama!! :)