I received an order Sunday while at church from a lady who wants 5 tatted crosses to give her children for Easter.  She says she has a tatted cross from her great-grandmother and cherishes it and wants her children to have some.  She wants them about 5 inches with tassels.  So, I started with one of the boys(request-1 blue and 1 green), the blue one is last in this picture even though it was tatted first.  It's Mary Konior's Large Cross from Tatting with Visual Patterns.  It's tatted in LadyShuttlemaker's HDT  Helms Deep size 50, and is 5 inches long.  Next, I started on a girls(request-1 pink, 1 purple, 1 lavender-not solids).  I decided to make a cross I haven't made before from one of my newest books-Tatted Bookmarks Needle & Shuttle edited by Barbara Foster Handy Hands, Inc. This is the Heritage Cross by Dee Powell.  First I tatted it in size 40 Lizbeth Girly Girl(center cross) which ended up being about 3 1/2 inches long, next I tatted it in size 20(which the pattern calls for)HDT Sacred Lotus from Crochet4U2Dye4 and it ended up only 4 inches long.  Well, now I have 2 crosses for future needs or young girls, and I have 4 crosses still to work on. 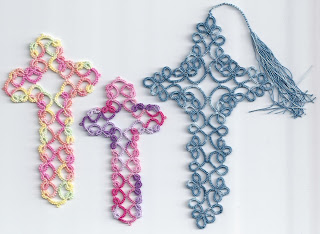 Also, I am still working on the doily which I had thought would go much quicker and would have been done a couple weeks ago and isn't.  I thought it would be a nice give-away "prize", but my husband has claimed it!
This weekend I won't get any tatting done(as far as I can tell) because our 4 & 8 year old granddaughters are coming to stay and play.  The oldest has asked me if she could learn to tat cuz' "she wants to do it when she gets older"(quite neat since she doesn't get to see me very often!!).  :)
If there are any tatting lessons this weekend, I will do my best to get pictures and share them with you all.  :)
Posted by God's Kid at 3:29 PM

The crosses are beautiful! That's a lovely sentiment from the lady at church.

They're lovely but I especially love the "helm's deep", one of my very favorite colors! Hopefully they will treasure them as much as she did hers.

Beautiful bookmarks! I love the color choices! That Mary Konior pattern is one of my favorites

Thank you Allison! :) I like that pattern for men's crosses.

Gorgeous bookmarks,
It's nice that your grandchildren want to learn tatting.
Margaret

I agree with Michelle, I hope the crosses are indeed treasured! Beautiful work.

Thank you Margaret and Jane!! :)

Thank you so much Jolimama!! :)