As always, I have been doing a million things at one time so lately I haven't been posting as often, but I am still tatting.
This is a pattern called Anniversary from Tatting with Visual Patterns by Mary Konior. It's done in size 10 rainbow variegated thread. I will let you know that it's not done correctly(but close). I hope to do this pattern again correctly sometime cuz' it's kind of a fun pattern to tat(at least I thought so). I made it to go all the way around the bag which is only a small tote. I will use this as my take-a-long tatting bag when needed. :) 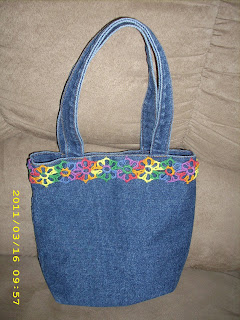 Now that's a happy tote! Love the pattern! I'm going to have to find me some Mary K's patterns or books.

your works are wonderful!