Not doing too bad on this quick round.
This has been done between last night
and today.  :) 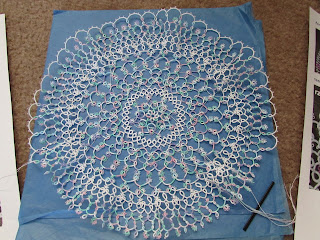 Hope you are tatting along today!!  :) 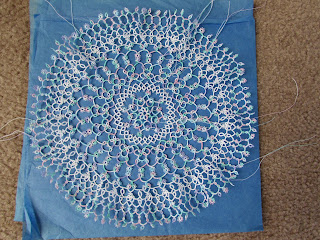 And, to make a long story straight to the point-Sunday
I had some tatting time and added a little more length to
the edging I am tatting for my Christmas wreath bow.
That is my quick update for tonight!
Have a fabulous night! :)

An edging to show a bit of

This is part of Mary Konior's Anniversary Edging
from Tatting with Visual Patterns.
I am tatting it in size 20 Christmas Red.  I started
last night when the lighting wasn't good enough
to work with the size 80 on the Spring Doily.
This is about 8 inches long, but needs to grow to
about 3 or 4 feet by my guess.  I plan on
adding more to the sides of this to widen it so
I can make a large Christmas bow to go on a
wreath.

My Spring doily has had a little more progress, but
I need to re-wind both shuttles so I took a break.
And, I am really hoping to start the bracelet with
the new beads.
Hope your day is bright, cheerful, and that you
have time to tat!!!  :)

Almost half way around!!!  Little bits here and there
and just maybe tomorrow to be a tatting day!  :) 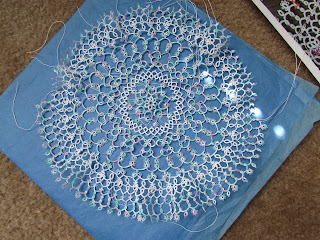 We just stopped at Hobby Lobby and I got these 2 balls
of Christmas Red size 20 thread.  Well, if you look close
you can see that the one of the left side is smaller
than the one on the right. They are both the same size
and I have noticed this with other balls in different
colors before, but this bothers me that maybe I am
not getting the same amount-although, maybe one is
just wound tighter????  Just wondering.
These are hopefully going to help me complete
a project started a few years ago and needs to be
done!!!!!!!!!!! 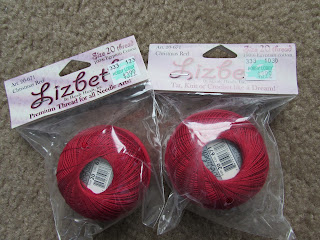 I also got some pretty blue beads and am in the
process of trying to decide what I want to make
with them.
Have a wonderful day, and a tatting filled
weekend(hopefully)!!!!  :)

I made some good progress considering I have been
dealing with headaches for 3 days and not feeling
too great.  I really am happy with how much I did
last night and what little I have done today!!! 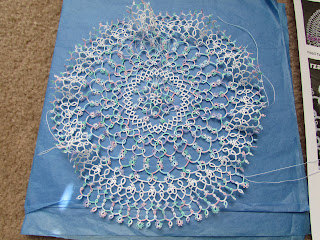 I finally finished round 11 Correction Round 10.  I still have ruffles, but
when laying on something flat, I kind of like them.
I am sure they will need to be blocked, but that's
ok, I only block after sewing in all ends after
completing the doily.  :) 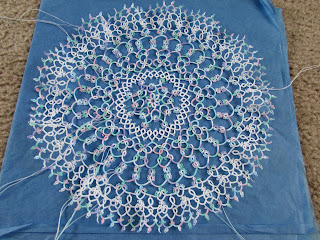 This second picture shows how wide it currently is
the width of a sheet of paper.  I had only 2 joining
rings to complete and when I closed the first one,
there was a mistake, I missed the picot somehow.
So this morning I went to open the ring to fix it,
and the thread broke(size 80), so I took it apart
tied on the thread and finished the row.  I am so
thankful!!  Now I can try to catch up!!! 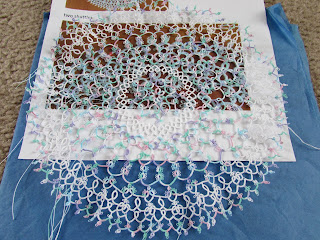 Our granddaughter invasion was a split invasion
this past week.  They came on Monday, but the
younger left on Wednesday to go camping with her
dad and his family, and the older stayed till Friday
and had to go with her dad for the weekend.
We had fun and lots and lots of noise!!!
Have a tatting-filled day!!!  :)

Well, I actually made it about 1/2 way around finally.
Tatting time has been limited by 2 days of not
feeling well(not sick, but no energy and just
not up to 100% and not much else got done
those 2 days either).
I do have an interesting little story to tell.
Yesterday we were waiting to go to our youngest
daughter's college graduation and there was a
knock on the door(rarely do we get company),
there was a lady wanting us to vote for her for
something(I am not into politics).  Well, my hubby
wanted the chance to talk with her about what
she is representing(me, being bored by the conversation
picked up my doily and started working again,
and after about 10 minutes the lady stops and says
are you tatting???  And I proudly said yes!  And
I thanked her for being the first person I have found
who knew what it was.  She told us that she is
forever kicking herself for not taking time to
learn from her neighbor who tatted-and my
hubby told her I would gladly teach her, but
she decided her hubby would not agree to
another craft and that she shouldn't tell him
about the beautiful tatting I have in my living
room.  Oh well, she left with a tatted snowflake. 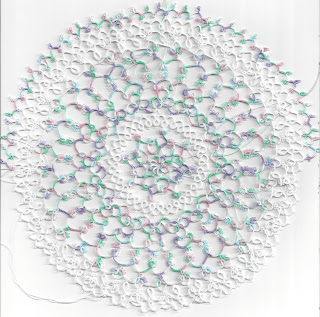 And this is our daughter before her crossing the
stage.  I had to use a 60X zoom to get this picture
so it's a little fuzzy, but it's the best that could be done.
Her program isn't completed until the end of August,
she is receiving and Associates Degree as a Sign
Language Interpreter.  We are so proud of her!!!  :) 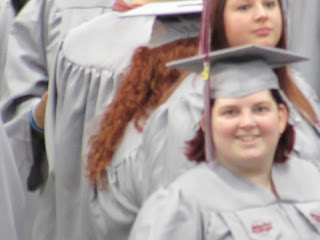 Oops, I forgot to add the blue background, but
I do need to say that sitting at a pain clinic
waiting for a friend gave me tatting time and
as you can see I did pretty good.  That is
about 1 1/2 hours work(doesn't seem like much).
As as you can see this is still ruffly, and I just "threw"
it on the scanner quickly so I could post it.  :) 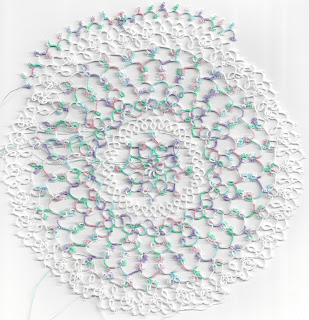 Hoping to get back to work on it tomorrow.
I am not sure how much tatting will be
accomplished next week because our granddaughters
will be invading us again, and our youngest daughter
graduates from college Friday(well...walks the aisle, but
doesn't know if she is truly graduated until the end
of August), and she will be home for 2 weeks.  I think
I may be a bit busy, but if they spend time going to the
swimming pool, or watching their Monster High movies
(which I am not into) I will tat then!!!  :)
Happy tatting everyone!!!  :)

Ok, Diane said blue and I went through my solids,
but I am horribly addicted to variegateds so, I
used size 40 Lizbeth Niagara Falls.  I  think
this actually shows up better than any solid might.
I was going to add beads to the joining picots,
but forgot until after 2 joins were complete.
Again, this is Ninetta's pattern here:
https://www.flickr.com/photos/ninettacaruso/16993398448/in/photostream/
And a big help when starting is muskaan's tutorial here:
http://tipsaroundthehome.blogspot.com/2015/04/tatting-tutorial-layered-rings-part-1.html 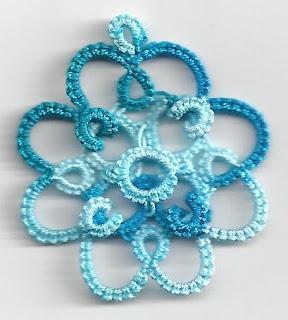 Hope you have had a wonderful day and
hopefully some tatting too!!!  :)

A huge thank you to muskaan for her tutorial on
Ninetta's layered rings.....link here:
http://tipsaroundthehome.blogspot.com/2015/04/tatting-tutorial-layered-rings-part-1.html
I have tried to tat this earring(I thought it was a pendant)
3 different times and I failed all 3 times.  I have hesitated
to attempt it again, but I really want to get it down!!!
It's a beautiful earring(I left off the top ring
because this one is not correct),
but now that I am understanding it, I want to do it again
and hopefully get it correct this next time.
As I said, this is Ninetta's pattern.....link here:
https://www.flickr.com/photos/ninettacaruso/16993398448/in/photostream/ 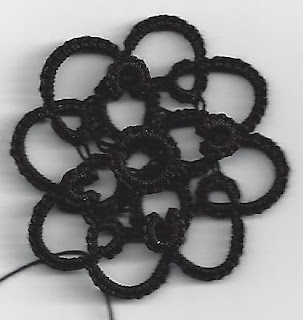