Straight from the shuttles and round 4 completed.
The last join is a mess, but I will be ok with it(hoping it doesn't show).
Again, this is tatted in size 80 Lizbeth Summer Fun and Snow White.
It's about 4 1/2 inches across now.  :) 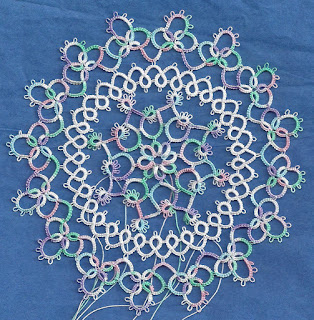 Got the next round done today....

I had to put something behind this because I figured
that the scanner wouldn't show up the white well at all.
This round is tatted in size 80 Lizbeth Snow White. 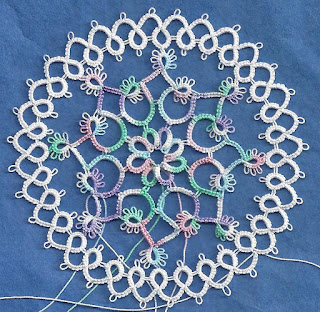 Not sure how much tatting will be able to be achieved
this weekend, but as other weekends have proven me
wrong, I will just say...wait and see.
Hope you have a wonderful and tatting filled weekend!!!

Ok, here it is(not in glory, but done).
This is Flowerpiece by Mary Konior in her book
Tatting with Visual Patterns.  I have wanted to tat this for a
long time, but couldn't decide exactly which colors I wanted
until I had my size 40 Lizbeth Coral Splash, and Salmon Med.
I added Lime Green Med. as my "flower stems".
It was all ok until tatting the final round and then
it cupped and bunched badly, so I blocked it into
submission.  As you can tell, it needed a better job,
but I tried! It's going to a friend who needs cheering up. 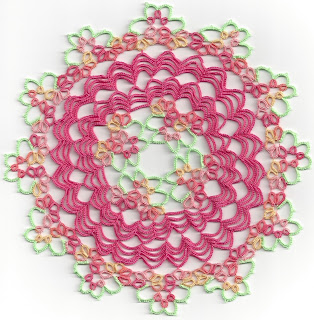 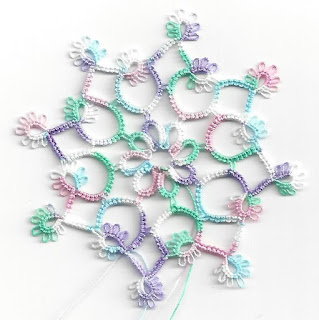 Have a wonderful day, and hopefully you will have tatting time! 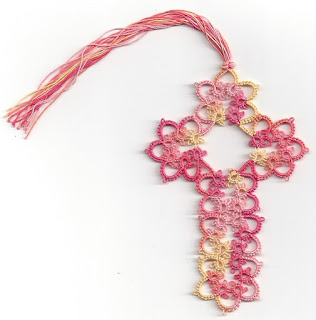 Next, is My Portion in size 40 Lizbeth Sea Island Citrus. 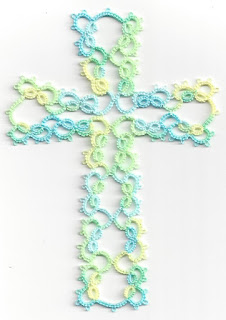 These are for another couple of seniors in our Sunday night group.
Updates:  The final purposely blurred picture project is
done and hopefully will be posted tomorrow.
And the "hide & seek" doily would have had that round done, but hubby
came home unexpectedly and it got "hidden" quick!
So more time needed on it!!!
Have a wonderful, and tatting enhanced day!!!  :)

It's not your eyes on this first picture!  It's still purposely blurred.
Just had to try and show some progress hopefully without giving away
what it is that I am tatting.  :)  I really am hoping the big reveal will be
worth it!!!  :) 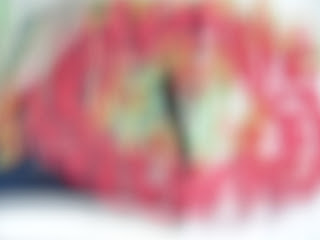 Next, is progress on the "hide & seek" doily.
For those who don't know, the reason it got that nick-name
is because it has to be kept hidden from the recipients(my in-laws)
who have dropped in while it was sitting out to be worked on-
it will be their Christmas present this year, and my hubby who
will want to claim it for his own.
It's the Hostess Set Centerpiece from Tatting Patterns from
Mary Konior.  It's being tatted in size 10 Lizbeth Turquoise Twist.
The only thing I have with this is that when I get to the clover rounds
it starts cupping badly.  After the last round of clovers I had to block
and severely stretch, so I am anticipating the same thing after
this round.  And then I believe there are only 2 or 3 more rounds left. 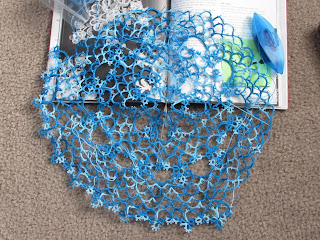 I have been tempted to tat Renulek's new doily, but with these
and still trying to work on my challenge, my list, and my
designs...I have put it aside.  Although, I have taken thread out
twice, so I may be starting that too, which will help to hide
Christmas presents, because my hubby my won't know about
them if he sees me working on other things.  :)
Have a fabulous day and hopefully some tatting too!!!  :)
Posted by God's Kid at 7:02 PM 11 comments:

Quite some time ago I wanted to tat a Broomstick Lace Cross,
well....first attempt....interesting, but not what I was thinking.  :) 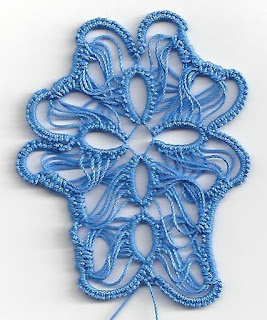 So...the other day I just had to try again.
This is much better, but.....has plenty of room for improvement!!!
It's tatted in size 40 Lizbeth Purple Splendor. 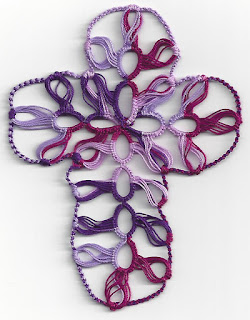 Before adding the lock chains around the outside to bring about
the broomstick lace look, it looked like this.  I love the look for
a second choice in the design.  So it will be 2 patterns in 1.  :) 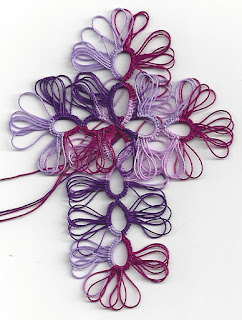 While working on the lock chains I ended up with "sea-sickness",
don't ask....I have no explanation or understanding.  It was awful
and I don't know what the cause was since I was just sitting and tatting,
but I pray it NEVER happens again!!!  :)
Have a tat-fully wonderful day!!!!!!!!!!!
Posted by God's Kid at 2:32 PM 13 comments:

This is a hopeful start to a possible new design(not from the tatting designer page).
As for the 3rd purposely blurred picture from just awhile back, I am still
working on that project, and wanted to show you what I have done
already, but.....I think it will make a bigger splash if I wait till it's finished...
so...you all have to wait. 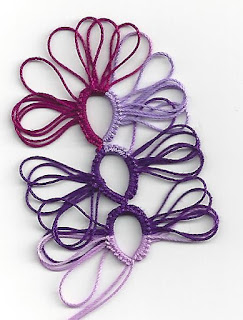 It really needs blocking, and it didn't come out as planned, of course.
But I really like it!!!  :)
This is another design of mine.
It's tatted in size 20 Lizbeth Sky Blue Dk. 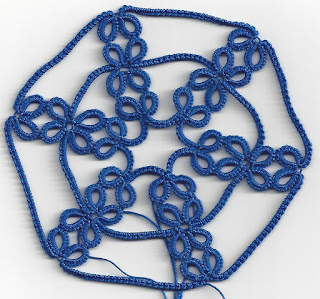 Straight from the shuttles and...clear!
This is Star No. 1 from page 51 in the book Tatting Patterns and Designs
by Gun Blomqvist and Elwy Persson.
It's tatted in size 40 Sunset HDT from AlenAleaDesign.
It's actually 4 triangle corner pieces joined to make a square.
I know it needs blocking, but I love it!!!  :) 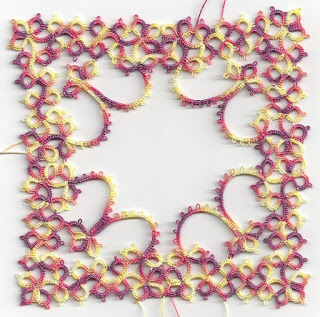 Working on the other 2 purposely blurred projects yet.
Happy tatting everyone!!  :)
Posted by God's Kid at 4:10 PM 14 comments:

Believe me or not, I am tatting

But.....pictures will be blurred purposely for now. 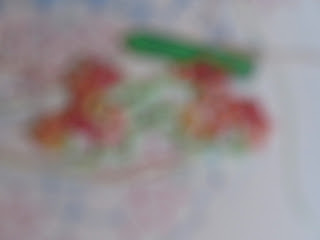 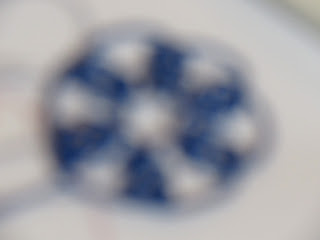 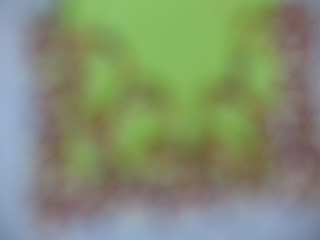 I think I have a favorite edging pattern now, and I love the design!!!  :)
This is Ninetta's Edging with Curled Onion Rings...pattern here:
https://www.flickr.com/photos/ninettacaruso/17045451018/in/photostream/
It's tatted in size 40 Lizbeth Coral Splash and Lime Green Med.
I love how the colors set themselves up and repeated!!  :)
The last "flower" will come together when the chain is tatted,
when I end it I will do a join where the chain thread ends
at the top and that should pull the last "flower" together!  :)

We had a great time with our granddaughters,
and the college daughter was home for a break too.
On Friday night we were up late and at 10:30pm the
younger granddaughter was knitting with her Aunt Sarah,
and the older one asked if she could tat again(she learned
quite some time back, but was told it was for old people
so she quit), and she was making rings and picots before we
quit for bed at 11:30pm.  I had pictures, but my camera
memory card has been acting up and deleting all the
pictures when I put it in the computer.
I hope you all had a wonderful weekend!!!!!!
Oh, and for those wondering, my hubby had orientation
for his new job the last 2 days and is waiting for them
to get him a trailer so he can work(he is a truck driver).
Now, I have another tatting project I want to try, and I
want to continue this edging.
Have a great day, and hopefully tatting time too!!! : )