I made a bit more progress on this doily.  It's from the book the Basic Book of Macrame and Tatting.
I made a mistake on a chain on the last row and forgot one picot so I had to do my best and make a correction and then finish this round.  The next round is supposed to be the blue again same design too, so it may take awhile. 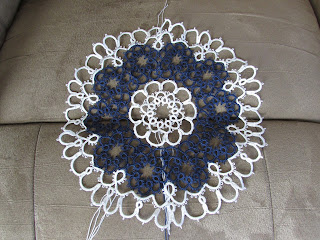 This is a Christmas gift(problem is who I am giving it to-my mother-in-law and her hubby, or my hubby).  It's tatted in size 10 Lizbeth Navy Blue and Snow White. 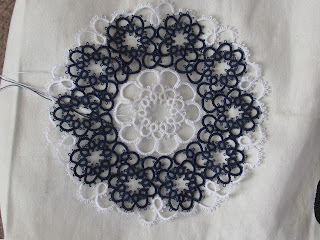 I messed up on the Navy Blue section, but have tried to work with it so that I didn't have to cut it off and start again.  I will post the book it's from next time(hopefully).  Here it is on a tote bag for an idea of it's size so far. 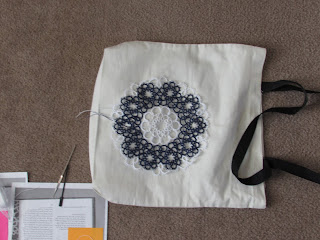 I just finished the 3rd garland for my friend.  So far I have succeeded in getting 1 done a year which means next year will be the final one.  For those who don't know...these are 18 feet long(so that is 36 feet of tatting-slow with 3 picots added to each side of each bead and size 10 thread). 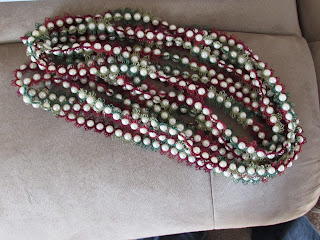 Yes, I have been working on the tablecloth.  It's still just a glorified table runner, but at least it's not abandoned.  I am trying to sew in all those ends and then place it on the table to give you a better idea of the size(maybe next week sometime). 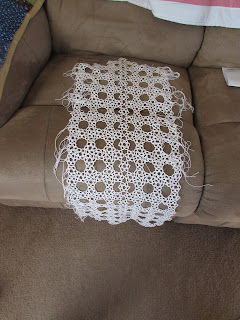 One night we had a storm and I can't sleep during them, so I tatted and our daughter knitted while watching a movie till the storm ended.  I did this cross which I have done lots of times.
Just something to keep me busy and not stressed by the storm
(don't look, I accidentally got a picture of my toes). 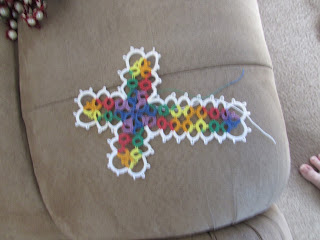 The piece below is a question piece.  One of my senior tatting students brought this handkerchief to me and asked if it was tatting.  I looked at it awful careful because it sure resembles tatting in the stitches a bit, but.....I told her I was pretty sure it was not tatting and she is wondering if anyone knows what type of lace work it is. 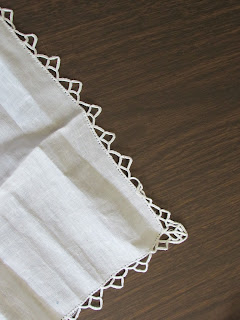 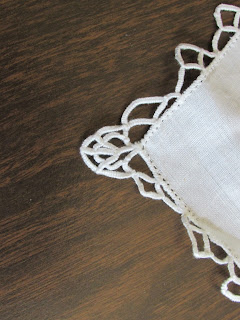 An update on my tatting senior students.  Well.....life has a way of keeping class from happening, but....one has achieved rings pretty well,
and as soon as she is feeling better she will be moving on to chains.
The other doesn't really practice and just casually acts interested, but still says she wants to continue.
Hope you are all having a wonderful day!!!
I have seen lots of other tatters' projects and progress and am so inspired!!!  :)
Posted by God's Kid at 6:28 PM 14 comments: 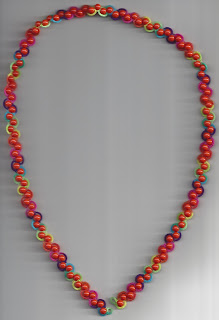 It's tatted in size 20 Lizbeth Rainbow Splash and some large beads.
I scanned it so the gray in the picture is due to having the beads keep the scanner lid from closing.
The seniors who are learning to tat are doing well.  One is making rings(we need to work on some tension), and the other is just getting the flip, but for some reason they both have troubles with the words under and over.  I thought it was simple, but they keep going the wrong direction.  Either way, they are learning!!!  :)  Hopefully I will be able to take pictures soon.
Hope you have a tatful day!!!  :)
I am off to prepare for the invasion of the granddaughters again.  :)